The EU has given the UK three weeks to remove what it regards as the offending clauses in the Internal Market Bill.

Legal action was one option the European Commission said it would not be shy in using. The deadline came and went yesterday.

This morning, President of the European Commission Ursula von der Leyen said the EU had asked the UK to remove the clauses of the bill, but it had not done so.

Therefore, the commission was issuing a letter of formal notice, which starts the legal proceedings.

The commission president said that by its very nature the bill was in breach of the obligation of good faith contained in the Withdrawal Agreement, and that if the bill became law as is, it would be in direct contradiction of the Northern Ireland Protocol.

President von der Leyen briefed the Taoiseach on the legal action, and they discussed the prospects for a free trade agreement between the EU and UK over the coming weeks.

Afterwards, Mr Martin said legal action was to be expected and Ireland supported the commission in its actions.

He maintained that a free trade agreement between the EU and UK was still possible, but today's legal action will further darken the mood of the negotiations.

"It did give the United Kingdom a month to respond in relation to withdrawing the Internal Market Bill and the unilateral action it took in relation to the Northern Ireland Protocol," the Taoiseach said.

Mr Martin was responding after he had held a 30-minute meeting with President von der Leyen.

He said they had discussed how the EU would deal with Brexit over the coming weeks. He said there was concern across Europe over the unilateral action by the UK on the protocol, and the need for the UK to "resile" from that.

"Parallel to that also we're conscious of the need to conclude a comprehensive future relationship agreement with the United Kingdom which is in the best interests of the people Europe, the UK and Ireland," he said

A "letter of formal notice" has been sent to Britain over its Internal Market Bill. "This is the first step in an infringement procedure," she said.

Ms von der Leyen said Britain had been asked to remove the problematic parts of the bill by the end of September. This deadline had lapsed yesterday.

She said that the draft Internal Market Bill is "by its very nature a breach of the obligation of good faith laid down in the Withdrawal Agreement".

She added: "Moreover, if adopted as is, it will be in full contradiction to the Northern Ireland Protocol."

The commission has invited the UK government to send its observations on the letter of formal notice within a month.

Ms von der Leyen said the EC will "continue to work hard towards a full and timely implementation of the Withdrawal Agreement. We stand by our commitments".

RTÉ News understands that the "letter of formal notice" was finalised by the European Commission earlier this morning.

The Internal Market Bill, if implemented, would "flagrantly violate" the Northern Ireland Protocol, according to a statement from the EC.

The UK government has already admitted the bill would breach international law.

The commission's letter of formal notice states that the United Kingdom is in breach of Articles 4 and 5 of the Withdrawal Agreement, the so-called "good faith" provisions, RTÉ News understands. 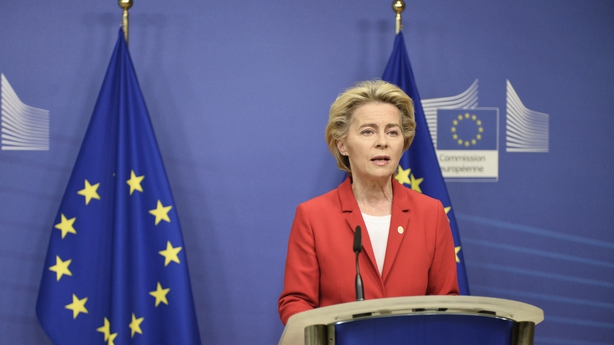 It is understood the letter went through several drafts, and its contents were closely coordinated by President von der Leyen's cabinet and the cabinet of Maroš Šefčovič.

Mr Šefčovič is the European Commission's representative on the EU-UK Joint Committee, which oversees the implementation of the Withdrawal Agreement.

On Monday, Mr Šefčovič said the EU would "not be shy" of using the legal means at its disposal over the UK’s pressing ahead of the Internal Market Bill.

Mr Martin will address the summit tomorrow on the impact of the Brexit negotiations on Ireland, including the controversy over the Internal Market Bill.

A senior EU official said that because Ireland was the country most impacted by Brexit, the Taoiseach would be given the floor to address fellow leaders.

It is understood Mr Martin will set out his thoughts on the prospect of a deal in the coming weeks, and the impact of the bill.

The Taoiseach said on Twitter that he had a "very good discussion" with Ms von der Leyen on the Covid recovery fund and Brexit.

"We want to see the Northern Ireland Protocol implemented fully and effectively. We also want to see a good agreement on future relations, including trade. Trust is vital to securing good outcomes," he said.

Very good discussion with @vonderleyen on Covid Recovery Fund and Brexit. We want to see the Northern Ireland Protocol implemented fully and effectively. We also want to see a good agreement on future relations, including trade. Trust is vital to securing good outcomes 🇮🇪🇪🇺 pic.twitter.com/8k8A7po8Of

Other topics at the summit include EU's relations with Turkey and Europe's response to the crackdown against demonstrators in Belarus protesting against the recent election result.

Over dinner tonight, leaders will discuss the strategic relationship with Turkey in light of Turkish incursions into Greek and Cypriot waters in connection with recently discovered natural gas fields.

Cyprus wants the EU to take a much tougher stance against Turkey, and that issue is holding up an overall EU response to the repression in Belarus.

The EU has been unable to agree sanctions against senior figures in the Alexander Lukashenko regime because Cyprus wants what it calls solidarity from other EU capitals on Turkey first.

Leaders will also discuss the poisoning of the Russian opposition leader Alexei Navalny and the recent EU-China summit.

Meanwhile, Tánaiste Leo Varadkar has said he expects Britain and the European Union to clinch a tariff-free and quota-free trade deal, in an interview published by online news site The Currency.

"I still think there will be a deal. It will be no quotas, no tariffs, some form of minimum standards and control on state aid and fishing," Mr Varadkar was quoted as saying.