Minister for Education Norma Foley has said it would be better if students were retained in smaller cohorts within a school.

She was speaking after more than 152 students were gathered together in one large assembly hall on their first day at St Leo's College in Carlow town today.

The students sat on chairs that had a one-metre distance between them.

Speaking on RTÉ's Prime Time, the minister said she was "making it very clear" that it would be best practice to gather students in smaller numbers.

The phased reopening of Ireland's schools began this morning after more than five months of disruption.

Almost one million children and teenagers are due to return to around 4,000 primary and second level schools from today for the first time since the middle of March. Many schools are reopening this week, with the remainder next week. 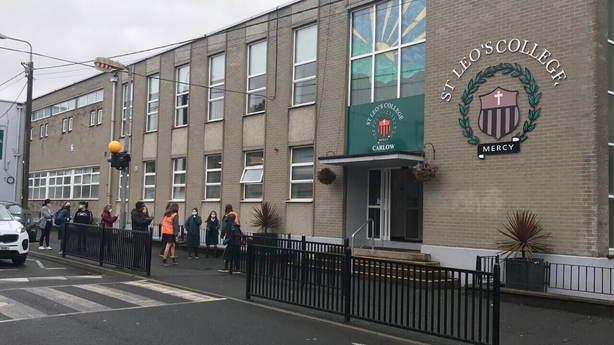 The principal of St Leo's College said she does not believe the secondary school has been in contravention of Government guidelines by gathering 152 students in a hall this morning on their first day back.

Welcoming the students to the school, principal Niamh Broderick told them: "We are all in this together".

"We have followed all of the Department guidelines. We did everything properly and safely," Ms Broderick told RTÉ News. "They were very well spaced out and sanitised on the way in and on the way out".

"It was very important to bring them together as a year group and all receive the same message, to celebrate with them, as a Catholic school, to emphasise that message to them."

Ms Broderick said that the school had to rethink and reimagine everything in the school, from the moment the student enters to when they leave. She said there was a huge emphasis on student well-being.

The Vice President of the Association of Secondary Teachers Ireland has said the organisation is "not in favour of big gatherings" in any part of schools.

Speaking on RTÉ's News at One, Ann Piggott said it is "unwise, and ill-advised" to hold large assemblies in schools.

She suggested that pupils be divided into smaller groups, with which messages can be shared or prayers services held.

"We must remember what is happening in the community. We are being told no more than 15 people can gather outside and six inside. It would be better if assemblies happened in small numbers, not in large gatherings."

Ms Piggott was speaking after the ASTI expressed concern about hundreds of medically vulnerable members who are being told them must return to work despite being categorised as "high risk" for Covid-19.

Read more:
Updates as back to school preparations continue
Children with 'sniffles' can go to school once 'otherwise well' - GPs

The ASTI said it has written to Minister for Health Stephen Donnelly asking him to intervene to secure a meeting between the union and the Health Protection Surveillance Centre regarding the reopening of schools for those in the "high risk" category.

The secondary teachers' union said it was receiving a significant number of calls from teachers whose illnesses include chronic kidney disease, cancer and serious heart disease and who are required to return to school.

Most have been reconfigured in an attempt to ensure a safe environment for students and staff, with several hygiene measures in place.

The Minister for Education said she was "not forcing anyone" to return to work. 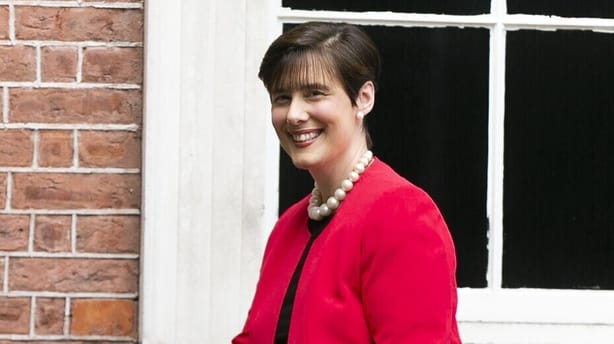 However, on RTÉ's Prime Time, Ms Foley said that independent medical assessments of teachers were being carried out, and that this was "separate entirely" from her department.

She said the department had put in place a fund of €84 million so that schools could replace teachers categorised as 'very high risk' and who therefore cannot return to work.

Ms Foley said that for a teacher who was independently adjudicated as being 'high risk' rather than 'very high risk', and who would therefore be deemed fit to work, there is an opportunity for a second review to take place.

'Impossible' to open school without lease of extra property

A Longford secondary school has revealed reopening its doors to all students next week would have been "impossible" but for Department of Education chiefs sanctioning an eleventh hour bid to lease a former commercial premises in the county town.

Meán Scoil Mhuire principal Aoife Mulrennan told of how the school had been forced to go to extraordinary lengths in safeguarding its return next week, among which included securing a tenancy agreement to provide additional classroom space at the former Turner's Printing premises on Earl Street.

Two further rooms in the Temperance Hall have also been secured, she said, alongside a string of other costly modifications to its existing Convent Road headquarters in a desperate bid to ensure stringent health and safety protocols linked to Covid-19 were adhered to.

"Preparing for back to school this year has been an impossible scenario for Meán Scoil Mhuire," she said, while referencing the ongoing efforts and lobbying attempts which have been made to try and secure approval for a new school campus.

The Meán Scoil Mhuire principal revealed how management had been left with little option but to try and source alternative accommodation owing to the fact many of its current classrooms could only hold between 14 to 17 students at any one time.

"With 570 students to accommodate, we could not fit everyone onto our existing site," she said.

"We have altered our gym and stage to provide three classrooms, utilised the teacher work areas for two more classrooms and knocked a partition wall to make two smaller rooms into one large room. With all these alterations, we had to rent two rooms in the Temperance Hall to provide spaces for our senior students and we remained without any space for our TY [Transition Year] cohort - until the Turners site was approved by the DES [Department of Education and Skills]."