A coroner in Malaysia has inspected a resort and nearby jungle ahead of an inquest into the death of Irish teenager Nóra Quoirin during a family holiday there last year.

The 15-year-old disappeared from the Dusun Resort and her unclothed body was found later after a massive hunt through dense rainforest not far from where she had been on holiday with her London-based family.

Her parents Meabh and Sebastien Quoirin say they believe there was a "criminal element" to her death as she had learning difficulties and would not have wandered off alone, but Malaysian police have insisted there was no sign of foul play.

Nóra disappeared on 4 August last year, a day after arriving at the resort, triggering a ten-day search involving hundreds of people, helicopters and sniffer dogs.

A post-mortem examination found Nóra probably starved and died of internal bleeding after about a week in the jungle, and authorities classified the case as "requiring no further action".

But her family pushed for an inquest, and a coroner has set dates from 24 August to 4 September for one to take place.

Earlier today, the coroner, prosecutors and the family's lawyer, under police escort, inspected the resort and the area where her body was found in the town of Seremban, Negeri Sembilan state, 63km south of Kuala Lumpur. 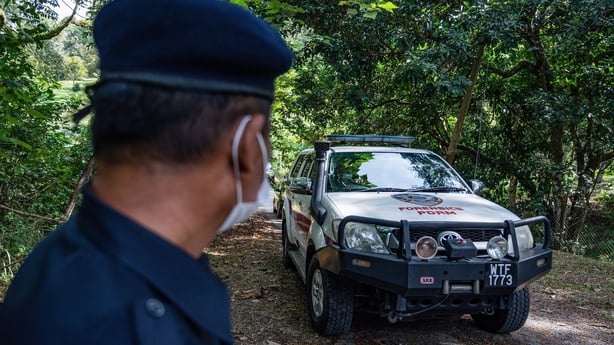 "The coroner took the opportunity to visit the place where the victim stayed and where the body of Nóra was found", Deputy Police Chief Che Zakaria Othman told reporters after the three-hour tour.

Ms Zakaria said the visit was to give the coroner "preliminary insight" on the location of the tragedy.

"She (the coroner) visited the Dusun resort, the waterfall, she walked in a stream and went to the location where the body was found," Mr Sakthyvell told AFP.

Read more:
'We want truth and justice for our daughter' - Nóra Quoirin parents
Malaysia to carry out inquest into death of Nóra Quoirin

He added that Nóra's parents would not be present during the inquest proceedings due to coronavirus-related restrictions, but would be interviewed by the coroner over a conferencing platform.

The proceedings will also be streamed live online, he said.