Taoiseach Micheál Martin is holding his first Cabinet meeting in Dublin Castle tonight after the new members of Government were formally appointed and received their seals of office from President Michael D Higgins.

Earlier today, he unveiled details of the new coalition Cabinet during a sitting of the Dáil in Dublin's Convention Centre. He has also revealed his 11 nominees for the Seanad.

The three party leaders carved up the 15 cabinet seats in a six-six-three Fianna Fáil-Fine Gael-Green Party split, with two Ministers of State (so-called "super juniors") also sitting at the table. 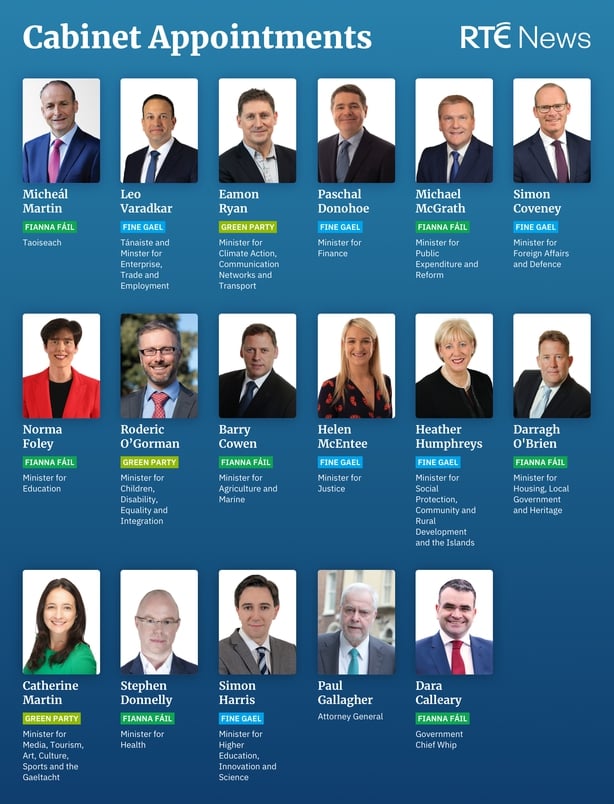 Stephen Donnelly (FF) is the new Minister for Health.

Darragh O'Brien (FF) has been given the Housing, Local Government and Heritage portfolio.

Barry Cowen (FF) is the new Minister for Agriculture and the Marine.

Michael McGrath (FF) is the new Minister for Public Expenditure and Reform.

Eamon Ryan (Greens) will be the Minister for Climate Action, Communication Networks and Transport.

Catherine Martin (Greens) will be Minister for Media, Tourism, Arts, Culture, Sports and the Gaeltacht.

Heather Humphreys (FG) is the new Minister for Social Protection, Community & Rural Development and the Islands.

Simon Harris (FG) will be Minister for Higher Education, Innovation and Research.

Hildegarde Naughton (FG) will be a Minister of State at the Department of Climate Action attending Cabinet.

Pippa Hackett (Greens) will be a Minister of State at the Department of Agriculture attending Cabinet.

Who is in the Seanad?

Taoiseach Micheál Martin today revealed his 11 nominees to Seanad Éireann. He has also advised the President to convene the first meeting of the new Seanad this Monday, 29 June.

Regina Doherty (outgoing Minister for Social Protection and former Fine Gael TD for Meath East) will be the new leader of the Seanad.

Outgoing senator for Fianna Fáil, Lorraine Clifford-Lee, was also re-nominated to the Seanad.

This afternoon An Taoiseach @MichealMartinTD called me to inform me that he was nominating me to serve in the 26th Seanad.I am hugely honoured and I am delighted to continue working on behalf of my community and country during the challenging years ahead. Ar aghaidh leis on obair pic.twitter.com/lrevW2E6BV

Who is departing the Cabinet?

Fine Gael's Joe McHugh has confirmed he is leaving his post as Minister for Education. He thanked Leo Varadkar for the "opportunity to serve" and said " we achieved a lot, I wish the new government every success."

He concluded by tweeting "an rud is annamh is iontach" - what is rare is wonderful.

Communications Minister Richard Bruton has lost his Cabinet post. He said on Twitter that it had been "a privilege to serve under four Taoisigh - Garret, John, Enda and Leo. We have helped deliver huge changes in Irish society during that time and there is still so much more for the 33rd Dáil to achieve".

I wish @CowenBarry and @pippa_hackett the very best in their new roles. To all at @agriculture_ie it has been a privilege working with you representing our great sector. Congratulations too to my @FineGael colleagues appointed today. Ar aghaidh leis an obair!

Outgoing Minister for Justice Charlie Flanagan tweeted congratulations to his successor, Helen McEntee. "I wish her every success and best wishes."

He said he had enjoyed six busy years in "two of the great departments, Justice and Foreign Affairs" and thanked all the staff and officials who had helped him along the way.

Another ministerial casualty of the new Cabinet is ex Agriculture Minister Michael Creed. He tweeted: "I wish Barry Cowen and Pippa Hackett the very best in their new roles." He said it had been a privilege to work at the Department "representing our great sector".

Former Minister for Social Protection Regina Doherty, who lost her Fine Gael seat in the last election, told RTÉ's 6.1 News that it was a day of "mixed emotions" for her "but I want to wish the new Taoiseach and all of the Cabinet every success in the months and years ahead."

She has now been announced as the new leader of the Seanad.

Independent TD Finian McGrath decided not to stand for election in 2020 - he had been Minister For Disability Issues in the 32nd Dáil.

Simon Harris is no longer Minister for Health but will remain in Cabinet as the new Minister for Higher Education, Innovation and Research.

It has been the greatest honour to serve as Health Minister. We didn't get everything right but I worked alongside the most dedicated people. Together we repealed the 8th, passed public health alcohol act, set up Slaintecare plan & tried to keep our country safe through #Covid19

He tweeted: "It has been the greatest honour to serve as Health Minister. We didn't get everything right but I worked alongside the most dedicated people. Together we repealed the 8th, passed public health alcohol act, set up Slaintecare plan & tried to keep our country safe through #Covid19.

"I wish my successor Stephen Donnelly every good wish. And I am excited about my new role creating a brand new Department of Higher Education, Innovation & Research. So much to do it and I approach it with enthusiasm and energy."