An Irishman who set sail from the coast of Norway in November is on course to complete an epic solo journey that brought him around Scotland and home to Dublin, carrying a flame the entire way.

Chef Darragh Carroll left Tromoya, an island off Norway's southeast coast, on 15 November and travelled along the Norwegian coastline in a traditional wooden boat named Ran.

"In Norse myth she is the God of the sea," he told RTÉ News from the deck as Ran pushed through the Irish Sea two miles north of Skerries.

Mr Carroll and Ran reached the port of Hugueasund, before then setting sail on a three-day voyage across the North Sea to the Shetland Islands.

From there, he travelled down to the Orkney Islands and planned to continue on to the Scottish mainland once the weather allowed. 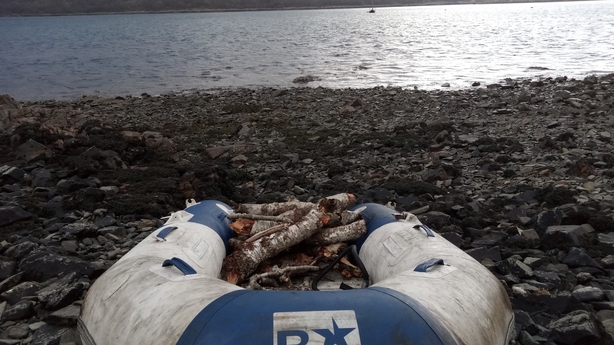 However, disaster struck as he rounded Cape Wrath, the most northwesterly point in mainland Britain, where he was hit by a flood tide during Storm Brendan.

"The wind was insane," he said, adding that he could barely stand up on board and lost control of the boat.

Mr Carroll said he was faced with a choice - try to battle the storm or get his boat to safety.

The tides carried him to Loch Eriboll, where he maneuvered the boat to a sandy bank and relative safety.

Despite being out of the worst of the storm, the boat was taking on water due to the high tides and his engine flooded.

The problem was worsened by the fact that he had entered the Loch on an extremely high tide and therefore needed another one to get out.

Mr Carroll ended up spending two months living on his boat, at what he described as a 45° angle, in the depths of the Scottish winter.

With the nearest shop a considerable drive away, he said he survived on periwinkles as he made the necessary repairs to his vessel.

The flooded engine proved to be beyond repair and so Mr Carroll completed the journey using wind-power alone.

While making his way on the home leg of the journey, he faced a further challenge - coronavirus.

He also took to fishing - catching mackerel and pollock, which were utilised fully. After eating the fish, the leftovers were used as bait for crab pots which augmented his rations further.

Now, almost seven months after setting sail, Mr Carroll is nearly home, but does not plan to stay put for long.

While the Covid-19 pandemic is naturally impacting on travel, Mr Carroll  plans to rest at the family home in Rathfarnham for a period before travelling to the centre of Ireland to complete his journey.

Mr Carroll said he got the inspiration for his journey when he lit a fire in the woods on the island of Tromoya, a site connected with the Vikings.

While meditating by the flames he felt that he should bring the fire from Norway to the Hill of Uisneach, the ancient ceremonial site in Ireland's midlands.

He brought the fire on board Ran, itself based on a Viking design, and has kept it lighting throughout his journey.

"The priority was to keep the fire alight and bring it to Uisneach," he said.

When possible, he plans to travel south from Dublin around Ireland and into the Shannon Estuary. He then hopes to travel up the river to the midlands, before finishing the journey to Uisneach by horse.

That in itself will bring his journey to a conclusion. Mr Carroll said that it was while studying traditional Irish methods of travel, through the use of horse and cart, that he ended up travelling to Norway.

There he ended up learning about the Norwegian travelling culture, which relied on boats rather than horses.

Now that he is home, the next adventure awaits.