Morgan Bullock, who became a social-media sensation last week after she posted a video of her Irish dancing, has been offered a place to perform in the Riverdance show next year in the US state of Virginia.

Riverdance dance director Padraic Moyles asked the Virginia native live on air on RTÉ's Liveline with Joe Duffy if she would like to join the cast when they perform at the Wolftrap Amphitheatre in Virginia next year.

"Morgan if you're up for it we'd love you to join us in person in Riverdance in Vienna Virginia, next year," said Mr Moyles.

She replied: "Oh my God, my heart just dropped."

Ms Bullock said that while the response to the video wasn't all positive, the negative comments were in the minority.

She said she has received much love and support since she posted her video, including an invitation from Taoiseach Leo Varadkar to dance in Ireland for St Patrick's Day next year.

this remix has no business being this hard 😩😤 pic.twitter.com/JZQh0jvtg5

Mr Moyles also told Ms Bullock that she would be given a scholarship to the Riverdance academy next summer.

"Morgan, you know the show. We've seen you in training. We want to work with you," he said.

"We want you to perform in the show, in costume, in front of an audience. We're also going to be giving you a scholarship to our academy next summer."

"We were just kicking off our 25th anniversary tour. We were in Radio City Music Hall in New York when we got our closure notice.  But we will be back. We will take it nice and slow." 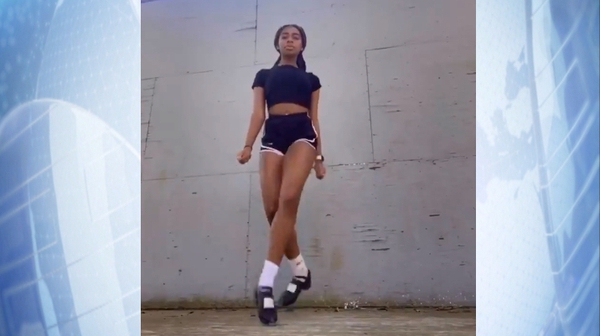