Taoiseach Leo Varadkar has said the coronavirus emergency is likely to go on well beyond 29 March and could go on for months into the summer.

In a special Ministerial Briefing broadcast, he said that "this is the calm before the storm and the surge will come".

His address comes after 69 new cases were confirmed in the Republic, bringing the overall number to 292.

A further ten cases have been confirmed in Northern Ireland, bringing the total there to 62. Overall there are 354 cases on the island of Ireland.

Mr Varadkar said it is believed that there could be 15,000 confirmed cases of Covid-19 in this country by the end of the month.

He said all resources of the State, both financial and human, are being deployed to stop the spread of the virus.

He called for the public's help in making social distancing workable and he paid tribute to healthcare workers who he said "need us to do the right things in the weeks ahead".

"Not all superheroes wear capes… some wear scrubs and gowns."

He said this is the calm before the storm and the surge will come.

In his address he said "let it be said that when things were at their worst we were at our best.

"We cannot stop the virus but we can stop it in its tracks and push it back," he said.

On how long this crisis will continue, he said "the truth is we just don't" know adding it may go on into the summer.

"In short we are asking people to come together as a nation by staying apart".

He said the Government will work with businesses to help them to adapt.

In his address, he said at a certain point the elderly and people with some illnesses will be asked to stay at home for several weeks, adding "this will be described as cocooning". He said they will be checked on to see they have everything they need.

Talking to young people, Mr Varadkar said he is sure they are fed up and may even be wishing they were going back to school tomorrow. He said this is hard for their parents as well, and asked them to ask their parents at least once every day if there is anything they can do to help.

He said when the surge comes "never will so much be asked of so few".

Mr Varadkar paid tribute to those keeping the supply chain going such as hauliers, saying they are heroes too.

He said journalists and broadcasters who are helping to educate and inform the public are worthy of respect too, and he asked people to take their information from trusted sources only.

He said on our national holiday he wanted to say everyone affected by this pandemic, "We are with you."

This evening's broadcast was made under Section 122 of the Broadcast Act, which allows the Government broadcasting time for announcements in the event of a major emergency. 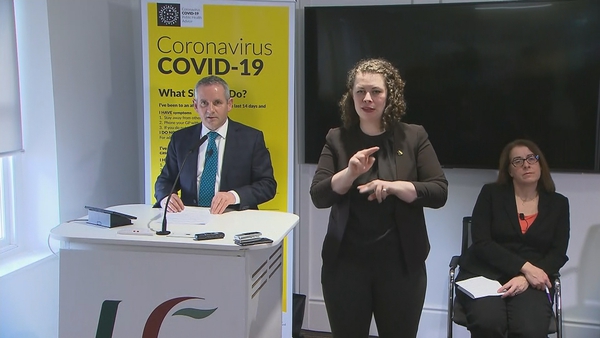