The Irish Rugby Football Union has confirmed that the Ireland vs Italy Six Nations matches scheduled between 6 and 8 March will not proceed as scheduled, given the need to protect public health in relation to the coronavirus.

IRFU Chief Executive Philip Browne said the organisation was acting on Government advice and that IRFU was "perfectly happy to comply" with its recommendations.

The IRFU is looking at the possibility of rescheduling the games at a later date and asked ticket holders to retain their tickets.

The decision to call off the matches follows an hour long meeting between Minister for Health Simon Harris and IRFU officials at the Department of Health.

We will immediately begin to work with our Six Nations partners to look at the possibility of rescheduling the matches and would hope to have an update on this in the coming days.https://t.co/80ByyvOd3E

Mr Harris said it is the "right decision" to cancel the match in the interests of public health.

He described meeting with IRFU as "excellent" and acknowledged that many rugby fans will be "disappointed".

The Department of Health has said that Ireland remains in a containment phase in relation to the coronavirus.

In a statement, the IRFU said it had a "positive meeting with Minister Harris and his advisers today, where we requested a formal instruction as to the staging of the Ireland v Italy international matches over the weekend of 6/8 March.

"At the outset we made it clear that the IRFU was supportive of the Governments' need to protect public health in relation to the coronavirus.

"We were then advised, formally, that The National Public Health Emergency team has determined that the series of matches should not proceed, in the interests of Public Health.

"The IRFU is happy to comply with this instruction.

"We will immediately begin to work with our Six Nations partners to look at the possibility of rescheduling the matches and would hope to have an update on this in the coming days."

Mr Harris said it was the "right decision" to cancel the Six Nations match in the interests of public health.

He described meeting with IRFU as "excellent" and acknowledged that many rugby fans will be "disappointed."

Iarnród Éireann said it would refund customers who had booked to travel to the Ireland vs Italy Six Nations game by train.

Customers who had booked rail travel online to/from Dublin for the cancelled @IrishRugby v Italy #SixNations match on 7th March will be fully refunded – please submit your refund application including booking reference to this weblink https://t.co/I5V7B2RDny

This evening, former Ireland Rugby Head Coach Eddie O'Sullivan said the cancellation of games in the Pro-14 rugby season "puts the remainder of the season in jeopardy."

Speaking on RTÉ's Drivetime, Mr O'Sullivan said the "Six Nations can probably be rescheduled to the autumn", but he said "it is just not possible to re-run the end of this season into the next season, and the financial damage to the game could be quite large."

He said: "It is a very compact and crowded year, so anything that gets cancelled now in the domestic game would be almost impossible to reschedule, because there just isn't enough free weekends."

In relation to the possible financial implications of the cancellation of Ireland vs Italy on 7 March, Mr O'Sullivan said the Irish national team is responsible for "well over 80% of the IRFU's turnover."

"There is a small financial ecosystem that fuels the game and if you take something out of that there is going to be a knock on effect," he added.

Separately, Ultan Dillane and David Heffernan have been released from the Ireland camp in Dublin this week in order to travel with Connacht to South Africa for their Pro 14 fixture against the Southern Kings. 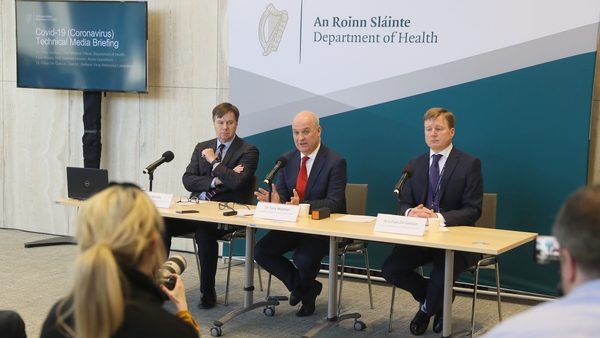