A golden ring once given as a present by Irish writer Oscar Wilde has been recovered by a Dutch "art detective" nearly 20 years after it was stolen from Britain's Oxford University.

The friendship ring, a joint gift from Wilde to a fellow student in 1876, was taken during a burglary in 2002 at Magdalen College, where the legendary writer studied.

The trinket's whereabouts remained a mystery for years and there were fears that the ring - shaped like a belt and buckle and made from 18-carat gold - had even been melted down.

But Arthur Brand, a Dutchman dubbed the "Indiana Jones of the Art World" for recovering a series of high-profile stolen artworks, used his underworld connections to finally find it.

Mark Blandford-Baker, home bursar of Magdalen College, said they were "very pleased to have back a stolen item that forms part of a collection relating to one of our more famous alumni."

"We had given up hope of seeing it again," he told AFP.

The ring will be handed back "at a small ceremony" on 4 December, said Mr Blandford-Baker, adding "we are extremely grateful to Arthur Brand for finding it and returning it to us."

The ring was an important part of Magdalen's large collection of memorabilia related to Wilde, who penned classics such as 'The Picture of Dorian Gray' and 'The Importance of Being Earnest'.

It was a present from Wilde and fellow student Reginald Harding to their friend William Ward in 1876 while Wilde was a student at Magdalen, one of the three dozen colleges that make up Oxford University.

The ring bears the inscription in Greek that says "Gift of love, to one who wishes love." It also has the initials of: "OF OF WW + RRH to WWW" on the inside. 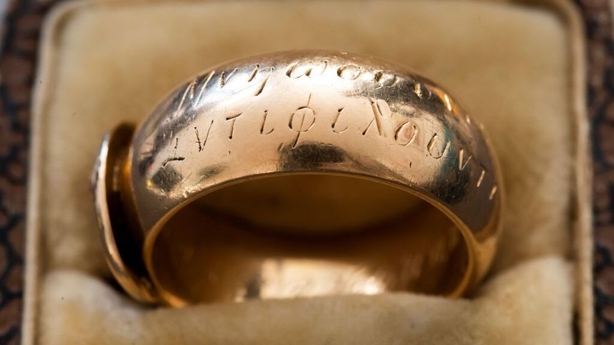 Disaster struck in 2002 when a former college cleaner named Eamonn Andrews broke into Magdalen, got drunk on whisky from the college bar, then stole the ring and two unrelated medals.

The college at the time offered a stg£3,500 reward for the ring's safe return - but after he was caught, the burglar told a court that he had sold the golden band to a scrap dealer for stg£150.

That might have been that, had Mr Brand not picked up the scent a few years back.

"Rumours started in 2015 in the art underworld that a Victorian ring has surfaced 'with some Russian writing on it'," Mr Brand told an AFP correspondent, who saw the ring at an apartment in Amsterdam.

"I knew that Oscar Wilde's ring was stolen from Magdalen College at Oxford and that it had a Greek inscription on it. It could have only been the same ring," he said.

The Dutchman then started to put out feelers.

Together with a London-based antiques dealer named William Veres, their inquiries eventually led them to George Crump, a man whom Mr Brand described as a "decent man with knowledge of the London criminal underworld because of his late uncle, a well-known casino owner."

Through Mr Crump, Mr Brand and Mr Veres finally managed to track down and negotiate the safe return of the stolen ring.

Mr Brand has previously hit the headlines for returning stolen artworks including a Picasso painting stolen from a yacht in France, and "Hitler's Horses", two bronze statues made by Nazi sculptor Joseph Thorak.

And the story of his latest find may have a final twist worthy of one of Wilde's tales.

Wilde's ring may have never been discovered were it not for another heist, when a gang of elderly criminals raided a vault in London's jewellery district in 2015 in what was described as the "biggest burglary in English legal history."

"There are very strong indications that the appearance of the ring is linked to the 2015 burglary at Hatton Garden Safe Deposit. Rumours that the ring has reappeared first started a few weeks after the burglary," said Mr Brand.

"And I was given the ring right in front of the Hatton Garden Safe Deposit... which I thought was a bit of English humour."