Hong Kong pro-democracy protesters have brought parts of the Chinese-ruled city to a standstill for a fourth day, forcing schools to close and blocking highways.

China's Global Times, owned by the state-run People's Daily, briefly tweeted that the Hong Kong government was expected to announce a weekend curfew after some of the worst violence in decades in the former British colony. It deleted the tweet soon afterward without an explanation.

Thousands of students hunkered down inside several campuses, surrounded by piles of food, bricks, petrol bombs, arrows with heads wrapped in cladding, catapults and other homemade weapons.

Protesters have torched vehicles and buildings, hurled petrol bombs at police stations and trains, dropped debris from bridges on to traffic below, and vandalised shopping malls and campuses, raising questions about how and when more than five months of unrest can be brought to an end.

"I am not prepared to fire the arrows unless there's no other resort," student Cheung, 18, said. "I am also new in learning how to use arrows. I think arrows can't really hit them (police) but if the police fire live rounds, we will die." 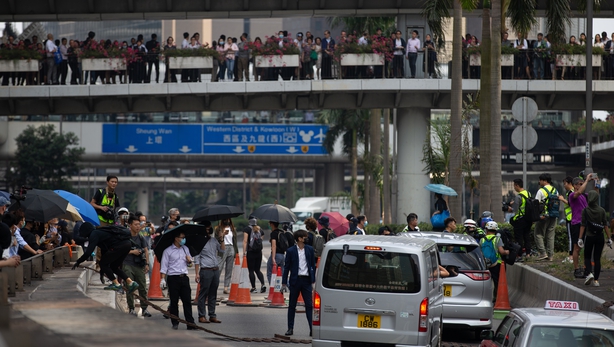 Police said one arrow was fired from Hong Kong Polytechnic University early in the morning.

"Such an act can be fatal," they said in a statement. "When more officers came to their aid, rioters still threw flower pots from heights, endangering public safety."

The Global Times' short lived announcement cited unnamed sources. It did not elaborate but, but online rumours have swirled along those lines.

Hundreds of protesters occupied roads in the Central business district, home to some of the world's most expensive real estate, during their lunch hour.

Many were dressed in office attire and wore the now-banned face masks as they marched down a major thoroughfare that connects luxury shopping malls and glittering skyscrapers. Hundreds of protesters also set up barricades near a popular shopping mall in the eastern part of Hong Kong island, dragging traffic cones and orange gates to block roads.

Some held up signs reading "Liberate Hong Kong, revolution of our time" and "Stand with Hong Kong", slogans that have become rallying calls for the protest movement.

Across the harbour, black-clad protesters and university students maintained their blockades of major roads, including the entrance to the Cross-Harbour Tunnel that links Hong Kong island to the Kowloon area, and a highway between Kowloon and the rural New Territories.

Police fired tear gas near the tunnel early today to try to clear the protesters. Roads were strewn with bricks and other debris, leading to widespread traffic jams.

Violence in Hong Kong on 24th weekend of protests

Dozens of riot police gathered outside several universities early in the day as students fortified their positions with metal poles, bricks and chairs.

At the Polytechnic University, near the Kowloon entrance of the Cross Harbour tunnel, hundreds of students wearing gas masks readied for confrontation.

Boxes of petrol bombs were placed at vantage points overlooking roads, including the tunnel, which has been blocked since Wednesday evening.

Students also poured litres of cooking oil across the ground in an attempt to thwart police should they try to enter.

Violence has escalated in recent days, with police shooting and wounding one protester at close range and one man described as a "rioter" dousing a man with petrol before setting him on fire. 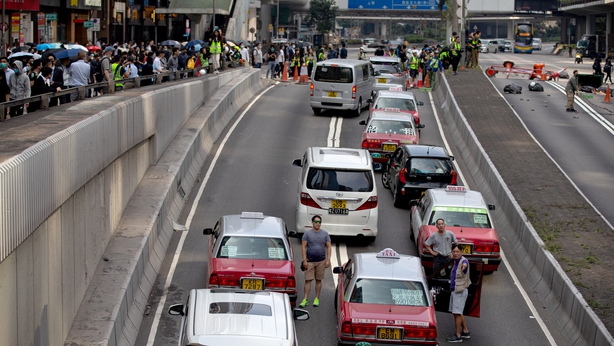 The demonstrations were initially spurred by what many residents see as the stifling by the Chinese government of freedoms guaranteed under the "one country, two systems" formula put in place when the former British colony returned to Chinese rule in 1997.

Anger grew about what many see as police brutality as the protests intensified.

China denies interfering and has blamed Western countries, including Britain and the United States, for stirring up trouble. Police deny using excessive force.

Police said on Wednesday violence had reached a "very dangerous and even deadly level" On Tuesday, they said Hong Kong was at the "brink of total breakdown".

Authorities said 64 people were injured during Wednesday's clashes, which left two men in critical condition. There were no further details about their injuries.

Police said a man had died after falling from a height on Wednesday but gave no further details.

"Over the past five years we have learned about the doctrine of peaceful protests," said student at Polytechnic University, who gave only the first initial of his name, C, referring to the 79 days of pro-democracy sit-ins in 2014.

"We have seen that peaceful protests do not work with a government that refuses to listen to its people," he added.

The city's Education Bureau announced on that all schools would be shut down through the week due to safety concerns, which usually only happens during typhoons.

Several universities also announced there would be no classes on campuses for the rest of the year, while several shopping malls closed.