A police officer shot a masked protester in an incident shown live on Facebook and a man was set on fire during one of the most violent days of clashes in Hong Kong since pro-democracy unrest erupted more than five months ago.

Protesters, who had already begun a city-wide day of action aimed at paralysing the international financial hub, reacted to the morning shooting by rampaging through train stations, barricading streets and vandalising shops throughout the day.

A masked assailant also doused a man with a flammable liquid and set him ablaze during an argument, with the horrifying scene captured on mobile phones and also posted online.

Police said a protester carried out that attack and accused black-clad "rioters" of an array of other violent acts, including throwing a petrol bomb inside a train carriage.

"Continuing this rampage is a lose-lose situation for Hong Kong," police spokesman John Tse said at a press conference in which he showed the video of the man being set alight, as well as a fire inside a train.

Hong Kong chief executive Carrie Lam denounced the violence and vowed it would not lead to any government concessions.

"I am making this statement clear and loud here, that will not happen," Ms Lam said.

The footage of the shooting, which was broadcast live to Facebook by a bystander - showed a police officer drawing a pistol as he tried to detain a masked person at a junction that had been blocked by protesters. 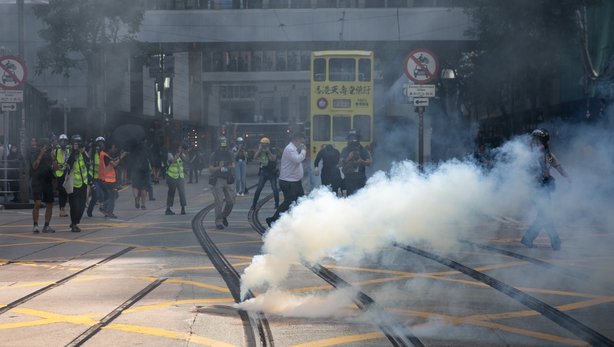 Another unarmed masked protester then approached the officer and was shot, quickly falling to the ground.

Authorities said he was in critical condition in hospital.

Police chiefs defended the officer drawing his weapon and firing as a legitimate use of force given his fears for his safety.

But protesters, who for months have accused police of using excessive force and demanded an independent inquiry into their actions, were incensed.

"I don't understand why police have to use that kind of brutality to hurt innocent people ... it's just out of control," a 22-year-old IT worker told AFP as she joined angry crowds to protest in the area of the shooting.

The United States has condemned the "unjustified use of deadly force" and urged police and civilians alike to de-escalate the situation, according to a senior official in the Trump administration.

"Hong Kong police and civilians alike have a responsibility to de-escalate and avoid violent confrontations," the official said, speaking on condition of anonymity.

Today's shooting was the third time protesters had been hit by live rounds fired by police. None of the shootings have resulted in deaths.

Ms Lam said the man set on fire was in a critical condition. She described that attack as "totally inhumane".

Protesters ignored her pleas for calm with further rallies in multiple locations across the city tonight.

Hong Kong has endured 24 straight weeks of increasingly violent rallies aimed at securing greater democratic freedoms from China, which has ruled the city under a "one country, two systems" framework since its handover from the British in 1997.

The protesters are desperate to stop what they see as Beijing's tightening control over Hong Kong, and reneging on its handover commitment to allow greater liberties for the city than those on the mainland.

But Beijing has refused to give in, and instead warned it is prepared to impose even greater security measures.

Tension in Hong Kong was already high following the death on Friday of a 22-year-old student who succumbed to injuries sustained from a fall in the vicinity of a police clearance operation a week earlier.

After a weekend of clashes and huge vigils, today's chaos began with small groups of masked protesters disrupting subway stations and roads during the rush hour commute.

But as footage of the shooting went viral, the protests snowballed.

During the lunchtime break in Central, a downtown district that hosts blue-chip international conglomerates and luxury retailers, police fired tear gas to disperse thousands of protesters, many dressed in office attire and chanting "murderers".

Tear gas and rubber bullets were fired in multiple districts throughout the day, including at university campuses.

One video circulated by protesters on messaging channels showed a police officer trying repeatedly to drive his motorbike into protesters who had gathered on a road.

Police said the officer has since been suspended, the first time the force has made an announcement removing someone from active duty in relation to the protests since they began.