Police in Hong Kong fired tear gas at black-clad protesters after they set fire to metro stations and vandalised buildings including China's official Xinhua news agency in some of the worst violence to hit the city in weeks.

Earlier, police had also used tear gas in a downtown park where thousands of protesters - many angry at what they say has been a heavy-handed police response over five months of anti-government demonstrations - had gathered on a sunny afternoon.

Small groups of masked protesters then fled to the Central business district, through streets lined with banks and top-end jewellery and fashion stores, setting light to ramshackle street barricades and hurling petrol bombs as riot police and water cannon trucks closed in.

Protesters are angry at perceived Chinese meddling with Hong Kong's freedoms, including its legal system, since the city returned from British to Chinese rule in 1997. China denies the charge.

Just as a crowd of largely peaceful demonstrators finished making origami paper cranes in Chater Garden, a cricket pitch in colonial days, activists began throwing petrol bombs on the streets outside, in front of the headquarters of HSBC and the Hong Kong base for the Bank of China.

Police again responded with tear gas on what was the 22nds traight weekend of protests.

Protesters later set fire to entrances of metro stations - often targeted as services close down to stop people gathering - and hauled two telephone booths out of the ground to erect one of many flaming barricades.

Cat-and-mouse clashes continued into the night as protesters retreated to the Causeway Bay area and across the water to the northern Kowloon side. 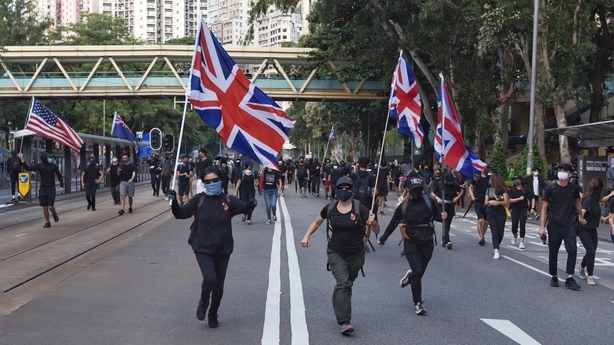 Some shops and businesses were also vandalised including an outlet of American coffee chain Starbucks and the local offices of China's Xinhua news agency.

Starbucks is owned locally by Maxim's Caterers and has been repeatedly targeted after the daughter of the Hong Kong company's founder condemned the protesters at the United Nations human rights council in Geneva.

Both the Hong Kong News Executives' Association and Hong Kong Journalists Association condemned the vandalism at Xinhua, one of the mainland's key symbols of presence in Hong Kong, calling for a halt to violence and urging police to handle the matter seriously.

Some protesters gathered across the harbour in the hotel and shopping district of Tsim Sha Tsui, at the tip of the Kowloon peninsula, with scores of passengers on the Star Ferry chanting "Hong Kong people resist".

Police said a group of masked protesters in that area had blocked roads with barricades, hurled petrol bombs and were "recklessly damaging facilities" as they proceeded up the shopping artery of Nathan Road towards the gritty Mong Kok district. In one incident, faeces was thrown at officers, police said. 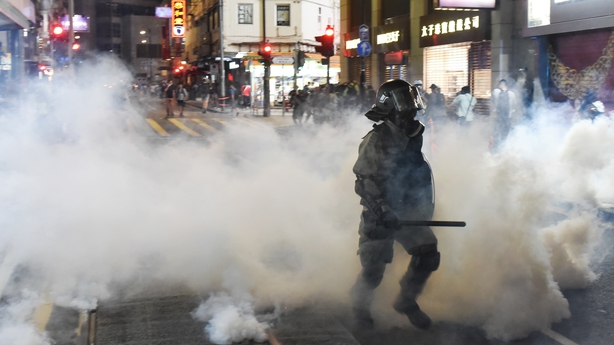 The early use of tear gas in Victoria Park was an attempt to nip in the bud a rally billed as an "emergency call" for autonomy for Hong Kong that was promised its freedoms when it returned to Chinese rule under a "one country, two systems" formula.

Activists, many wearing now-banned face masks, pulled up metal fencing and used a football goal to build barricades near the park, a traditional venue for rallies and vigils for decades, their actions masked by others holding umbrellas.

"Hong Kong people, resist," they shouted. "Revolution of our time."

Many sang the British and US national anthems, waving multi-national flags and a few called for independence, a redline for Communist Party leaders in China who have vowed to "crush the bones" of anyone pursuing such a move.

One policeman was slashed in the neck with a knife last month. 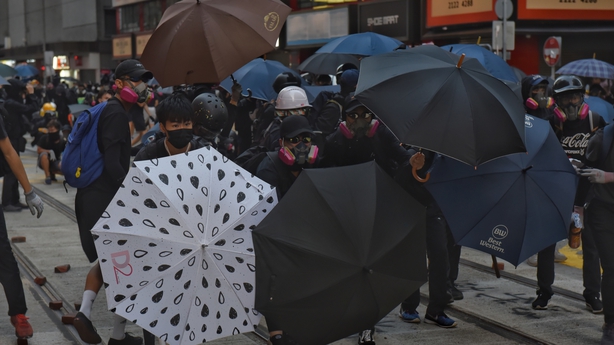 The rally in the park was not given official police permission, as is required, but that has not stopped people gathering in the past.

Face masks were banned under a revived colonial-era emergency law.

Government data on Thursday confirmed that Hong Kong slid into recession in the third quarter for the first time since the global financial crisis of 2008.