Hong Kong today confirmed it had plunged into its first recession since the global financial crisis as months of seething pro-democracy protests and the US-China trade war exact a heavy toll on the financial hub.

The semi-autonomous Chinese city has been upended by nearly five months of huge, often violent, pro-democracy demonstrations with little end in sight as Beijing and city leaders adopt a hardline approach.

Clashes between protesters hurling bricks and petrol bombs at police wielding tear gas and rubber bullets have become a weekly occurrence, hammering the city's once-solid reputation for stability and safety.

The unrest has hit the city's tourist and entertainment industries hard, compounding economic woes that were already being caused by the global trade war.

Figures released by the government today showed gross domestic product plunged 3.2% in the third quarter compared with the previous period, when it saw a 0.4% drop.

That means the city is experiencing a technical recession, with two back-to-back periods of contraction.

It is the first time the city has witnessed a recession since early 2009 at the height of the financial crisis.

Hong Kong's economy was already facing strong headwinds at the start of 2019 as it was hit by the US-China trade war, battering a city that is hugely reliant on the world's two largest economies.

In the first quarter the city was growing at a lacklustre 0.6%. 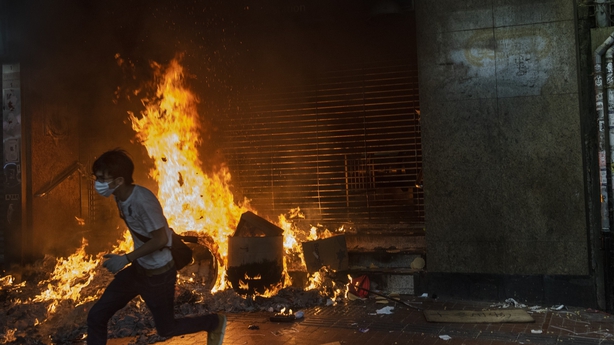 But the protests that erupted in June only made matters worse, hammering the tourism, leisure and entertainment industries as visitor numbers plummeted.

Last week Financial Secretary Paul Chan warned it was "very likely" the city would end the year in a full-blown recession.