Bogus self-employment could be costing the State €1 billion per year in lost tax and PRSI, the Oireachtas Committee on Employment Affairs and Social Protection was told today.

The Committee heard from Martin McMahon, a campaigner who for over 20 years has been examining the state's role in investigating and pursuing cases of bogus self-employment.

Mr McMahon also alleged that the state was facilitating bogus self-employment through secret test cases which he claimed had no valid legal basis.

However, the Department of Employment Affairs and Social Protection said it strenuously refuted allegations that it approved of misclassification of workers.

This results in labour cost savings of up to 30% for the employer and a loss to the PRSI-based Social Insurance Fund, as well as creating a significant competitive advantage over "compliant" companies.

Mr McMahon told the committee that this could constitute state aid in breach of EU rules.

He said that in 2000, he contacted the Scope division of the Department, which adjudicates on whether a worker is an employee or a self-employed contractor in relation to his own circumstances at the time.

While he ultimately lost his case, he made a number of discoveries about how employment status evaluations were being carried out.

He told the committee that a "test case" decision had been made by the Department - with the agreement of the Revenue Commissioners - to deem all couriers in the state to be self-employed for tax and PRSI purposes, regardless of the circumstances in which any future individual courier might find themselves.

However, he said various state authorities had since admitted that there was no legal basis for such test cases, citing correspondence from the Social Welfare Appeals Office as recently as 9 January of this year, and an article by Minister Regina Doherty on 25 March, 2019.

He also said he knew that there had been no actual working courier in the Social Welfare Appeals Office process, and how a test case happened at all was a "mystery".

He said that when he queried the courier's special arrangement with the Comptroller and Auditor General in 2002, asking why courier companies were allowed to evade their tax and PRSI obligations, the CAG replied: "The arrangement employed is administratively efficient in collecting tax from a sector which traditionally has been recalcitrant when it comes to paying tax."

He went on to tell the Committee: "Workers don't get a choice to be 'recalcitrant' when it comes to paying tax."

Under the process to adjudicate employment status, a worker first refers a complaint to the Scope division of the Department of Employment Affairs and Social Protection. 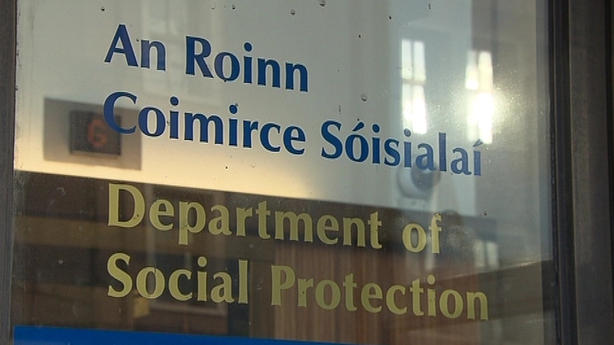 However, a Scope finding can be appealed to the Social Welfare Appeals Office, which then holds a new hearing.

Mr McMahon criticised the SWAO procedures, saying it together with the Department of Employment Affairs and Social Protection were "the biggest creator of bogus self-employment in the state".

He said that as far back as 2001, it had been estimated that approximately 20% of workers in construction were misclassified as self-employed, but he estimated that the figure was significantly higher now.

Mr McMahon said there was no point in enacting further legislation when the "road block" was the Social Welfare Appeals Office in a "broken" system.

He called for cases to be referred to the Circuit Court for adjudication, rather than by civil servants appointed by the minister who could be "hired and fired by the minister depending on the decision they make".

He also alleged that none of the relevant deciding officers had legal experience, but were making decisions on "massive" money issues.

He said companies were able to negate their entire PRSI liability in private hearings where no one was entitled to know what was going on.

He said the scale of the problem was "massive" - claiming that in the IT sector, up to 50% of workers were on Personal Services Contracts.

Sinn Féin TD John Brady described Mr Mahon's contribution as "mind blowing", adding that it had shown that the state had colluded unlawfully with certain sectors to evade massive amounts of tax and PRSI going back to 1993 and 1994.

He said the Irish Congress of Trade Unions had previously told the committee that the practice of bogus self-employment could be costing the state €240 million a year in the construction sector alone.

Deputy Joan Collins described the situation as a "damning indictment".

After the hearing, the Department of Employment Affairs and Social Protection said it "strenuously refutes" the proposition that it approves of the deliberate misclassification of workers as self-employed.

It said the Minister for Employment Affairs and Social Protection Regina Doherty is firm in her role of protecting workers from both a social protection and an employment rights point of view, as well as ensuring the integrity of the Social Insurance Fund.

It said a new Employment Status Investigation Unit has been established to focus solely on false self-employment.

Since its establishment in August, it has carried out a number of detailed employer inspections, across five sectors, involving a total number of 482 workers.

The Unit is also preparing campaigns for the construction and English Language Training sectors.

In 2018, the Department's Special Investigation Unit carried out 3,134 investigations in the construction sector, of which 2,476 were done jointly with the Revenue Commissioners, and yielded savings of over €2.7 million in that year.

A Code of Practice for Determining Employment or Self-Employment Status is also being updated to take accounts of factors including the gig economy.

The Department reiterated that any employer or worker can seek a Scope determination, with each case taken on its own facts.

It also noted that the Minister intends to bring forward new legislation to give added protection to workers, particularly if threatened with employer victimisation for challenging their employment status, and will include the creation of a new offence banning the misclassification of employees.

The Department said it wanted to reassure employers and workers alike that its inspectors nationwide are focusing on the area of false self-employment.

It said almost 2,000 employers have been inspected this year to the end of August and, with the added focus being brought to bear by the newly formed Employment Status Investigation Unit, an even stronger yield is expected by year end and over the coming years.