A US diplomat has told Donald Trump's impeachment inquiry that aid for Ukraine was linked to the opening of investigations into the president's political rivals.

The US envoy to Ukraine told the inquiry that there had been an irregular and informal channel of policy-making.

He said he was told that a White House visit and military aid were dependent on Ukraine publicly announcing investigations into Mr Trump's political rivals including Mr Biden, something which Ambassador Taylor described as crazy.

"Today was just more triple hearsay and selective leaks from the Democrats' politically-motivated, closed door, secretive hearings," the administration said in a statement.

"Every day this nonsense continues more taxpayer time and money is wasted."

Democrats, meanwhile, have described Ambassador Taylor's evidence as the most damning testimony they had heard.

"It's all there. What's there left for me to say when you have such a clear and detailed statement?" said House Democrat Tom Malinowski, a former diplomat.

Mr Taylor said he was told Mr Trump wanted Mr Zelensky "to state publicly" that he would investigate Mr Biden and his son Hunter for what he said was corruption in Ukraine.

He said that the US ambassador to the European Union, Gordon Sondland, told him that "'everything' was dependent on such an announcement, including security assistance".

Another carrot being dangled, Mr Taylor said, was a proposed summit between Mr Zelensky and Mr Trump. 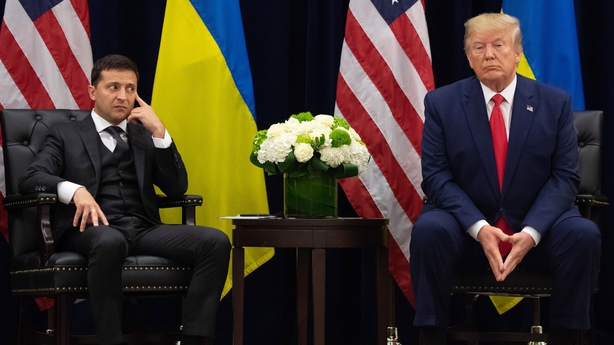 Emerging from the testimony, Democratic congressman Adriano Espaillat tweeted that "what I heard today from #BillTaylor was very troubling and explosive".

"At some point we're going to have to conclude our investigation and go forward with what we have, and what we have is incredibly damning right now," said another Democratic legislator, Ted Lieu.

A new CNN/SSRS poll yesterday showed support for Mr Trump's removal from office is now 50% to 43% against.

However, reflecting the intensely partisan divide among voters, 87% of Democrats are pro-impeachment, compared to just 6% of Republicans.

Mr Trump admits to asking Ukraine's government to probe what he says is corruption related to Mr Biden.

However, he denies Democrats' allegation that he tried to strong-arm the Ukrainians by linking the delivery of US military aid to his request for an investigation.

Mr Trump has already branded the impeachment proceedings a "coup," a "hoax," a "witch-hunt" and a variety of swear words.

Yesterday, he prompted an uproar by claiming he was the victim of a lynching, a word linked in the US to the darkest days of slavery's aftermath.

So some day, if a Democrat becomes President and the Republicans win the House, even by a tiny margin, they can impeach the President, without due process or fairness or any legal rights. All Republicans must remember what they are witnessing here - a lynching. But we will WIN!

More than 3,400 African Americans were lynched between 1882 and 1968, and congressional Democrats reacted with collective anger.

"How dare you?!" seethed congresswoman Barbara Lee on Twitter, as she assailed the "disgusting and ignorant message" from Mr Trump.

The White House fought back, with spokesman Hogan Gidley insisting that Mr Trump did not mean to compare "what's happened to him to one of the country's darkest moments".

There was rare criticism from the top Republican legislator, Senator Mitch McConnell, who said Mr Trump had made "an unfortunate choice of words".

He added, however, that Mr Trump does have a "legitimate complaint" over a "totally unfair process".

Mr Trump will rely on Mr McConnell to deliver an acquittal in the Senate if the lower house does go ahead with an impeachment vote.