The first sitting of the Stormont Assembly in two-and-a-half years has ended in acrimony after a last-minute bid to prevent the decriminalisation of abortion was blocked.

Despite the ongoing absence of a power-sharing executive, the Assembly sat after it was recalled by members (MLAs) wishing to protest at changes to Northern Ireland's abortion laws.

The British government will introduce new laws on abortion and same-sex marriage in Northern Ireland unless devolution at Stormont is restored by midnight.

At the start of proceedings in Parliament Buildings, there was an attempt by anti-abortion MLAs to fast-track a piece of private members' legislation through in a single day to halt the abortion reform.

But outgoing speaker Robin Newton prevented the matter being considered.

DUP Paul Givan MLA had urged the suspension of standing orders to enable the bill to be tabled.

However, Mr Newton said a new speaker would need to be in place before the Assembly could turn to such a legislative bid.

The election of a speaker requires cross-community in the chamber - such support was not forthcoming as nationalist members indicated they would not back any appointment in the absence of a power-sharing executive.

SDLP members also attended, but leader Colum Eastwood said his party would not support a speaker if an executive was not formed. Their MLAs then walked out of the chamber.

Sinn Féin did not turn up to a sitting it had branded a circus.

DUP leader Arlene Foster said it was a "shameful day," adding "this is not a day of celebration for the unborn."

Mrs Foster said decriminalisation at midnight would not mark the end of efforts to prevent the introduction of abortion services in Northern Ireland.

She said her party would explore "every possible legal option" open to it.

Anti-abortion and pro-choice campaigners gathered at the front of Stormont this morning to voice their contrasting views on the emotive issue.

MPs at Westminster successfully amended the British government bill in the summer to include measures to end the near-blanket prohibition on abortion and introduce same-sex marriage.

Once the 19th-century laws that criminalise abortion lapse at midnight, the British government will assume responsibility for introducing new regulations to provide greater access to terminations in the region by next April.

In the interim period, women will be offered free transport to access abortion services in England.

Under the Act, same-sex marriage will become legal in Northern Ireland in January, with the first wedding expected the following month. 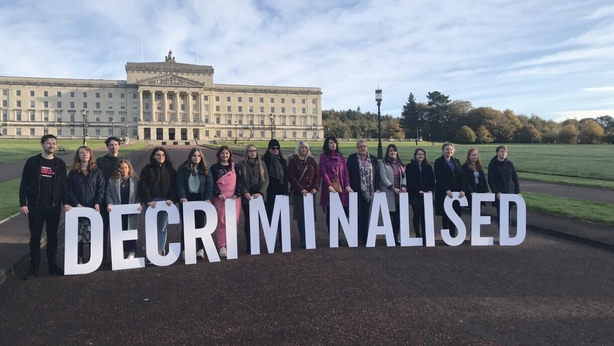 If the Stormont Executive is restored at some point after tomorrow, MLAs will not be able to take retrospective action to block the Westminster legislation.