Tens of thousands of protesters gathered in one of Hong Kong's busiest shopping districts this morning, braving a downpour to join an anti-government rally in the eleventh week of what have been often violent demonstrations in the Asian financial hub.

The heavy turnout indicated that the movement still has broad support despite the ugly scenes witnessed during the past week when protesters occupied the city's airport, for which some activists apologised.

Anger over a now-suspended bill that would allow criminal suspects in Hong Kong to be extradited to mainland China erupted in June, but the rising unrest has been fuelled by broader worries about the erosion of freedoms guaranteed under the "one country, two systems" formula put in place after Hong Kong's return from British to Chinese rule in 1997.

Gathered in Victoria Park at the start of the rally, protesters held aloft placards with slogans including "Free Hong Kong!" and "Democracy now!"

The crowd was peaceful and included elderly, middle aged and young people, with some parents carrying toddlers. 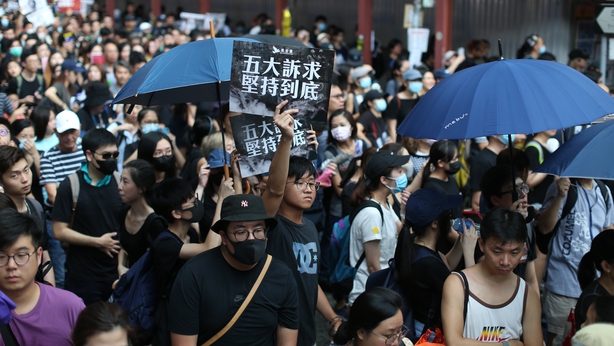 It is a "rational, non-violent" demonstration, according to organisers the Civil Human Rights Front, the driving force behind record-breaking rallies in June and July that saw hundreds of thousands of people hit the streets.

Police have given permission for the rally to go ahead but banned a proposed march.

Previous bans on marches have been ignored by protesters, leading to clashes with riot police.

Bonnie Leung, a spokeswoman for the Civil Human Rights Front told reporters: "We expect a huge number of participants... we hope to show to the world Hong Kong people can be totally peaceful."

"If Beijing and Hong Kong's tactic is to wait for our movement to die, they are wrong... we will soldier on."

China's propaganda apparatus has seized on the weeks of violence, with state media churning out a deluge of damning articles, pictures and videos.

State media also ran images of military personnel and armoured personnel carriers across the border in Shenzhen, prompting the United States to warn Beijing against sending in troops.

Analysts say any intervention by Chinese security forces would be a reputational and economic disaster for China.

During smaller protest marches yesterday, which ended without large-scale clashes, many protesters chanted "See you in Victoria Park!" as they left the streets.

Tens of thousands of protesters massed in the park as the rally started in the afternoon, while many others thronged the nearby streets in a show of defiance expected to stretch into the evening.

"We have tried many times with peaceful approaches... I really hope the government can listen to us." 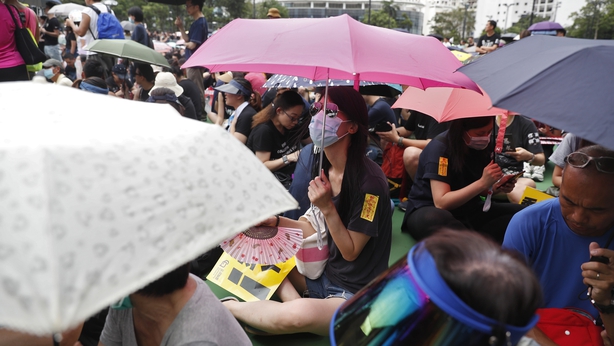 The unprecedented political crisis was sparked by opposition to a plan to allow extraditions to the mainland.

But protests have since morphed into a wider call for democratic rights in the semi-autonomous city.

Under a deal signed with Britain, authoritarian China agreed to allow Hong Kong to keep its unique freedoms when it was handed back in 1997.

But many Hong Kongers feel those freedoms are being chipped away, especially since China's hardline president Xi Jinping came to power.

In the last two months, millions of people have hit the streets.

Battles between police firing tear gas and rubber bullets, and hardcore protesters using rocks, Molotov cocktails and slingshots, have since become routine in the city.

Both sides trade the blame for provoking the violence.

Beyond suspending the extradition bill, Beijing and city leader Carrie Lam have shown no desire to meet key demands such as an inquiry into police violence, the complete withdrawal of the bill and an amnesty.

Beijing has turned the screws on Hong Kong's businesses, pressuring them to toe the line and condemn the protesters.

On Friday, Cathay Pacific announced the shock resignation of CEO Rupert Hogg after the carrier was excoriated by Beijing because some staff supported the pro-democracy protests.

A day later the "Big Four" accountancy firms scrambled to distance themselves from an advert placed in a newspaper purportedly by employees saying they supported the protests.