The Taoiseach has said he "absolutely" has confidence in a senior civil servant who advised against proceeding with the National Broadband Plan.

The Secretary General at the Department of Public Expenditure warned in stark terms that the plan posed great financial risks and only provided questionable benefits.

Documents released this afternoon show that Robert Watt went so far as to call for the procurement process to be cancelled.

Speaking in the Netherlands, Leo Varadkar said he has tremendous respect for Mr Watt. He said Mr Watt and his team gave very strong advice against the plan, but that the Government has to make a decision on the balance of advice.

He said this advice also included an independent cost benefit analysis which showed that in all scenarios, the benefits outweighed the costs.

Mr Varadkar said that maybe the plan was a leap of faith, but that it was a "leap of faith in believing in the future of rural Ireland".

While the Taoiseach confirmed confidence in Robert Watt he said: "it doesn't mean we'll always agree and we don't always agree".

He added he would not like to be in a government where everyone always agrees and where officials did not raise concerns or alarms, describing such a scenario as "group think".

On 1 April, Mr Watt wrote a note to Minister for Finance Paschal Donohoe in advance of the minister's meeting with the Taoiseach some days later.

He strongly recommended against the plan on grounds of affordability, risk and value for money.

He said that justification for spending €3 billion was not presented and he believed it involved costs and excessive risks with questionable benefits. 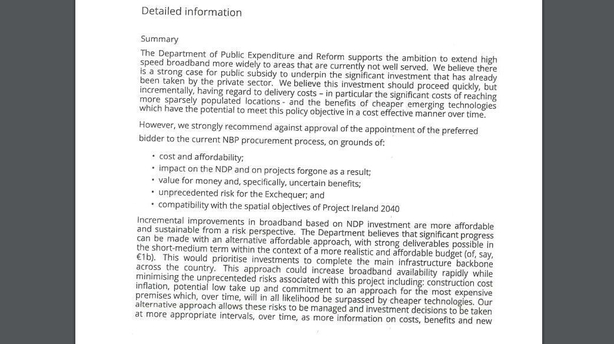 He also called for the procurement process to be cancelled and said incremental improvement in broadband through the National Development Plan was the better and more affordable option. 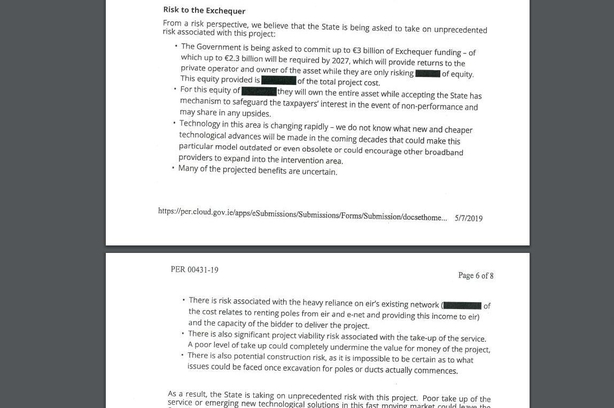 Subsequently, on 16 April, Mr Watt further cautioned against the project in a letter to Mark Griffin, the Secretary General of the Department of Communications.

Mr Watt said: "I wish to re-emphasise one further time this department's fundamental concerns in relation to the unprecedented risk that the State is being asked to bear in the event that the current NBP contract is recommended for approval by Government."

He wrote that the €3bn represented a major leap of faith in relation to the benefits that will accrue from the project.

There was particular concern about the standard connection charge for households and businesses being set at €100, "even though the actual cost of connection could run to several thousand euro."

Crucially though the amount the preferred bidder will invest in the project is redacted in this correspondence.

In a detailed response to Mr Watt, Mr Griffin said there was optimism that the bidder would achieve savings through its own procurement of a subcontractor.

Mr Griffin predicted that by year ten, all premises in the intervention area will have access to high speed broadband.

He said the operating company would have enough annual revenue to cover the costs of the remaining 15 years and beyond.

He said the benefits that broadband would deliver in areas such as: education, health, tourism and regional development could not be measured by the Department of Public Expenditure's spending code.

After three years of rigorous analysis he said the project was compliant with the Public Spending Code.

The Secretary General said the homes that will get broadband will benefit to the tune of around €12,000, but added they would pay up to 50% of the overall project cost through ongoing charges.

Yesterday, the Cabinet approved a proposal from Minister for Communications Richard Bruton to grant what is called "preferred bidder" status to a consortium led by Granahan McCourt Capital for delivering the NBP.

Barring a significant unforeseen event, the contract for the rollout out of high-speed broadband to 1.1 million people should be signed-off in less than six months.

Mr Donohoe told a news conference yesterday that he firmly backed the broadband plan given what he termed the "cascade of future benefits", which would flow from its completion.

Donohoe says he did not ignore any advice on NBP

Speaking on RTÉ's News at One today, Minister Donohoe said he did not ignore any advice provided on the National Broadband Plan.

He said considered the advice offered by senior civil servants and made a decision based on that advice.

"As minister I have to receive advice but I ultimately have to make a decision in relation to what to do," Mr Donohoe said.

He said he believes there are safeguards within the contract for the project that "are capable of securing our needs as this project rolls out".

Mr Donohoe said he would not be pulling funding from other areas in order to fund the project, which may cost up to €2.7bn.

"It is not my plan to change existing commitments to other priorities our country has," he said.

"This is why it is all the more important to be clear that it is my intention to deliver new capital funding to ensure we can deliver this plan in addition to our existing commitments."

Mr Donohoe also said there is a risk in relation to the project due to the potential emergence of new technological developments.

However, he said he believes this means the State is better off by not owning the infrastructure.

The minister added that if the State was to build the asset itself it would cost a lot more to do so.

"We have to be aware that if the State was going to build this asset it would cost more to do that. If we owned this asset we would have responsibility for a high level of risk in relation to providing a project like this.

"What we are not talking about is providing a luxury to people who don't have it, this is the platform that I think in the future."

He said it is important that citizens know that this decision was made by the Government "after huge debate and an awful lot of robust inquiry".

He added: "On balance I believe the proposal we have in front of us is the best way of delivering the additional connectivity that parts of our country have been demanding for so long".

The Dublin Central TD said he has to weigh up the consequences of going ahead with the project or cancelling it and believes that on a comparative basis proceeding is the right decision to take.

Mr Donohoe also rejected claims that the announcement has been timed to provide Fine Gael with a boost going into the local and European elections at the end of the month.

He said he wrestled "deeply" with the decision as he has been immersed in it for so long.

Labour leader Brendan Howlin said the tendering process for the NBP should have been collapsed "when all the main bidders walked away".

He said broadband should be distributed by a State-owned distribution system, owned by the people and that he would be happy to spend the €3bn if the Government was providing a network into every home and that it was State owned.

Mr Howlin said we need to know the detail of much the project will cost and what the connection charges will be.

He said he wanted to see all the documentation that is "being hidden from us".

Minister Bruton said the plan will yield benefits that are "substantially in excess" of the project costs.

He said 1.1 million people, who will not be served with the service commercially, should have the same access to digital technology as those in urban areas.

Mr Bruton said the Government was advised to "piggyback off the existing infrastructure".

He added that the commercial sector is not willing to make this investment and the Government has to carry much of the upfront cost of development.

Mr Bruton said the contract contains many "clawbacks", for example if the take up is more rapid and the company is more profitable than envisaged, there will be a 60% clawback of the profit realised.

Fine Gael TDs and senators were supportive of Mr Bruton, who addressed them tonight on the Government's broadband strategy.

The minister told them that Fine Gael was determined those who live in rural Ireland would not be left behind.

On the tendering process, Mr Bruton maintained that every single concern was exhaustively examined and scrutinised before yesterday's cabinet decision was reached.