A delegation of US politicians, including House of Representatives speaker Nancy Pelosi, has travelled to Northern Ireland as part of their fact-finding mission.

Ms Pelosi said the delegation came to Northern Ireland out of respect for "those who participated in the Good Friday accords".

She said the US has a vested interest in the Good Friday Agreement and she was looking forward to having constructive conversations with friends.

Speaking at the Derry-Donegal border, Ms Pelosi said: "We have said we are guarantors of the Good Friday Agreements because we believe it is fair to both sides, that's why they agreed to it.

"We come here out of respect for the courage of those who have participated in the Good Friday accord.

"We believe that Brexit should be just an aberration in this discussion as we continue to build and strengthen our peace that was generated by the Good Friday accord."

A group of local anti-Brexit protesters held a banner and a fake customs sign to illustrate queues at the border. 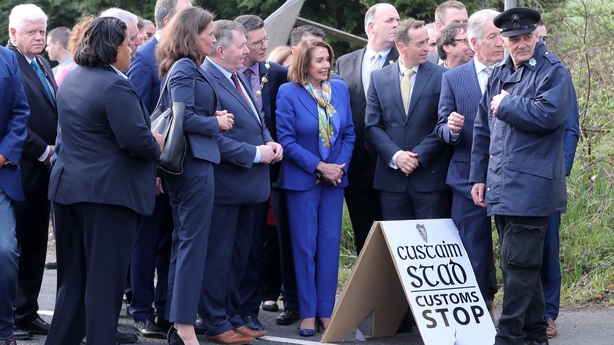 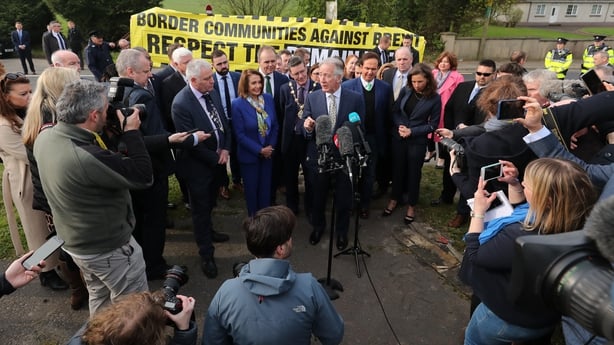 Dermot O'Hara, a spokesman for Border Communities Against Brexit, greeted Ms Pelosi at the border.

"This is a British border here. We want the border to be in the Irish Sea and we appreciate the visit by the delegation and their support for the rights of the Irish people."

John Boyle, mayor of Derry City and Strabane Council, said it was evident Ms Pelosi was determined to protect the integrity of the agreement.

"They will support us in ensuring it does not impact on that very important agreement which was signed in 1998."

He said a hard border would be difficult to deal with psychologically.

"Many of us going back generations remember what a hard security border looked like here," Mr Boyle said.

Over the past three days, first in London and then at a number of public events in Dublin, Ms Pelosi made known her views about Brexit and how it might affect the Good Friday Agreement.

When she addressed both Houses of the Oireachtas yesterday she said we must ensure that nothing happens in the Brexit discussions that imperils the Good Friday Agreement.

Another member is Richie Neal, a Massachusetts Congressman, who was awarded an Honorary Degree at Magee University for his contribution to US-Ireland relations.

The delegation travelled to Belfast this evening. But the absence of a sitting Assembly at Stormont means the scheduled visit there, tomorrow morning, Good Friday, will be a low-key affair.