Thousands of Sudanese demonstrators have camped outside the defence ministry in Khartoum to push for a civilian government, defying a curfew and calling for mass prayers after the military overthrew Omar al-Bashir after 30 years of autocratic rule.

Demonstrators who have been holding almost daily anti-Bashir protests rejected the decision to set up a transitional military council to run the country for two years and vowed to continue protests until a civilian government is established.

Activists called for mass prayers today outside the defence ministry compound, a focal point for protests.

Activists wearing yellow vests controlled traffic around the compound this morning and managed foot traffic to and from the sit-in, a Reuters witness said.

They also blocked a major bridge in central Khartoum.

Mr Bashir, 75, had faced 16 weeks of demonstrations against him.

World powers, including the United States and Britain, said they supported a peaceful and democratic transition sooner than two years.

Speaking on state television on Thursday, Mr Ibn Auf said Mr Bashir was being detained in a "safe place" and a military council - which it was later announced he is heading - would now run the country.

Sudanese sources told Reuters that Mr Bashir was at the presidential residence under "heavy guard". 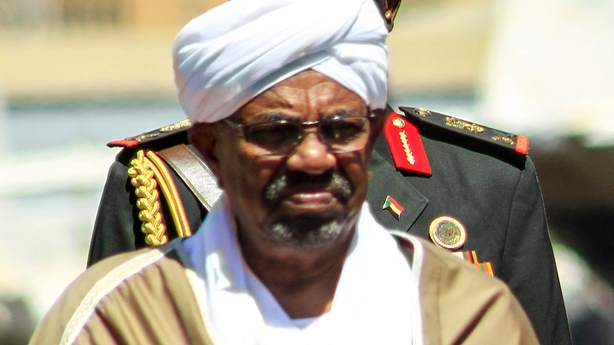 Mr Ibn Auf also announced a state of emergency, a nationwide ceasefire and the suspension of the constitution.

State television said there would be a curfew from 10pm to 4am.

The main organiser of protests against Mr Bashir, the Sudanese Professionals Association, rejected Mr Ibn Auf's plans. It called on protesters to maintain their sit-in outside the defence ministry.

In a challenge to the military council, several thousand protesters remained in front of the defence ministry compound, and in other parts of the capital, as the curfew went into effect.

They chanted: "They removed a thief and brought a thief!" and "Revolution! Revolution!"

Some shops in Omdurman, across the River Nile from central Khartoum, remained open past 10pm, a Reuters witness said.

Mr Bashir has been indicted by the International Criminal Court in The Hague and is facing an arrest warrant over allegations of genocide in Sudan's Darfur region during an insurgency that began in 2003 and led to the death of an estimated 300,000people.

He denies the allegations.

Mr Bashir's downfall was the second time this month that a leader in the region has been forced out after mass demonstrations.

Algeria's Abdelaziz Bouteflika, in power since 1999, stepped down on 2 April after six weeks of protests.