US President Donald Trump's administration wants to see US astronauts back on the Moon by 2024.

NASA has accepted the challenge, saying a new heavy rocket for the Moon missions, the Space Launch System (SLS), will be ready next year.

"It is the stated policy of this administration and the United States of America to return American astronauts to the Moon, within the next five years," said Vice President Mike Pence in a speech in Huntsville, Alabama, the "Rocket City" where US launchers have been built since the 1960s.

"Let me be clear, the first woman and the next man on the Moon will both be American astronauts launched by American rockets from American soil," he said, echoing previous declarations by NASA chief Jim Bridenstine that a woman could be the next human to set foot on the Moon.

The first manned Moon flight since the last Apollo mission in 1972 had been scheduled for 2028.

But the programme has encountered frustrating delays in the development of the SLS, whose first uncrewed flight was recently pushed back beyond 2020.

Within months of taking office, President Trump made clear his desire to reinvigorate the US space agency, which had been somewhat adrift since the 2011 end of its shuttle programme.

In 2017, Mr Trump set a goal of returning to the Moon as a first step before moving on to human exploration of Mars.

NASA then adopted a schedule of launching a manned mission to the Moon in 2028.

"That's just not good enough. We're better than that. It took us eight years to get to the moon, the first time, 50 years ago, when we had never done it before," said Mr Pence, who heads the White House's National Space Council. "It shouldn't take us 11 years to get back."

"It's time for the next giant leap," he said, alluding to the famed words spoken by astronaut Neil Armstrong upon becoming the first man to step onto the moon in 1969. 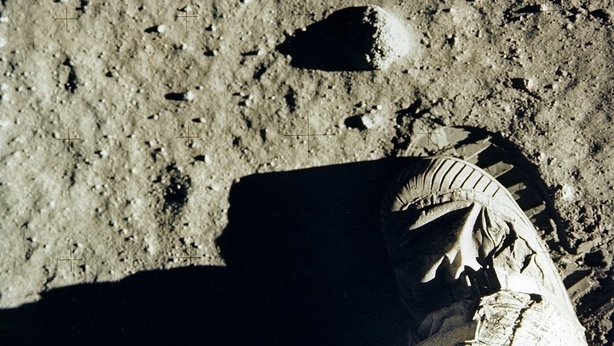 In his speech, Mr Pence criticised the "bureaucratic inertia" and "paralysis by analysis" that he said had resulted in the SLS delays, and called for a "new mindset" at the space agency.

Included in that criticism, though unnamed, was Boeing, which is building the SLS rocket that was scheduled to launch for its first flight in 2020, until NASA recently announced it would not be ready in time.

"Urgency must be our watchword," said Mr Pence. "Failure to achieve our goal to return an American astronaut to the Moon in the next five years is not an option."

He said the US was engaged in a present-day "space race" under Mr Trump, this time against China, just as the country was in the 1960s under President John F Kennedy against the Soviet Union.

Mr Pence threatened to use commercial launch systems or to look to other partners if NASA is not ready in time.

"To be clear, we're not committed to anyone's contract. If our current contractors can't meet this objective, then we will find ones that will," he said.

He did not mention SpaceX or other companies by name, but the allusion was clear, as SpaceX currently has rockets capable of launching heavy loads into space.

"We got it loud and clear," Mr Bridenstine responded to the vice president. He assured the gathering that the SLS rocket would be ready in 2020.