British and EU officials are continuing technical talks on the Irish backstop in Brussels today, despite a downbeat assessment by the EU's chief Brexit negotiator of proposals put forward by the UK's Attorney General.

It is understood that Michel Barnier told member states that proposals tabled by Geoffrey Cox for an arbitration panel that would allow the UK to exit the backstop were not acceptable, and that fresh proposals were needed.

The crunch vote on the Withdrawal Agreement is just five days away, but a gloomy assessment by the EU's chief negotiator of the first formal proposals tabled by the UK on getting legally binding changes to the backstop reveals the gulf between both sides.

According to officials, Mr Cox suggested that an arbitration panel could decide whether or not both sides were acting in good faith in trying to ensure that the backstop did not take effect.

The UK's preference has been a swift free trade agreement, and/or a technological solution to avoid the backstop.

One EU diplomat said Mr Cox's proposal would give the UK the right to say it had acted in good faith but that all efforts to replace the backstop had come to nought and therefore it could walk away.

There are also reports that Mr Cox proposed what has been described as a "mini backstop" which would ensure there was no infrastructure on the Irish border.

However, a senior Irish figure said that this completely misunderstood what he described as the holistic nature of the backstop in preserving north-south cooperation, the all island economy and the Good Friday Agreement.

Officials say there is still time to get an agreement, with the possibility that Mr Cox and Brexit Secretary Stephen Barclay returning to Brussels tomorrow or over the weekend.

Meanwhile, the UK Department for Exiting the EU has announced it will set up three panels to advise the British government on ways to develop alternative arrangements, such as technology, to replace the backstop.

The panels will involve technical experts in trade and customs, businesses and trade unions and a parliamentary consultative group.

A Department for Exiting the EU spokesman said: "There is clear support for finding alternative arrangements to ensure there is no hard border on the island of Ireland.

"In adding business and technical expertise on top of civil service resource, we will ensure we are strengthening the government's efforts to identify the necessary facilitations and technologies.

"The creation of these advisory groups now will mean that we can move at pace once negotiations with the EU begin." 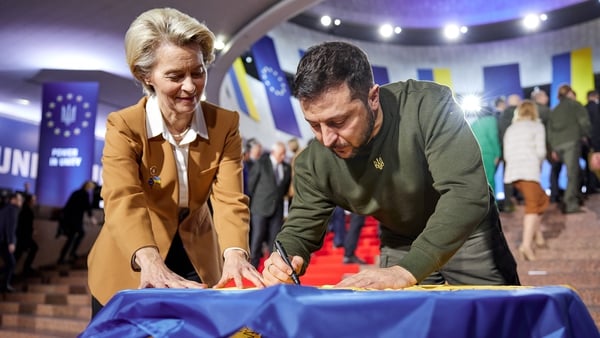