A top Russian security official has accused the United States of deploying forces in Puerto Rico and Colombia in preparation for a military intervention in Venezuela to topple Russia's ally, President Nicolas Maduro, something the US has denied.

"... The United States is preparing a military invasion of an independent state," Nikolai Patrushev, secretary of the Russian Security Council, was quoted as saying in an interview with weekly newspaper Argumenty i Fakty.

"The transfer of American special operations forces to Puerto Rico, the landing of US forces in Colombia and other facts indicate the Pentagon is reinforcing its troops in the region in order to use them in an operation to remove ... Maduro from power," Mr Patrushev said.

However, the US special envoy for Venezuela, Elliott Abrams, has denied the reports.

"The president has said all options are on the table. Presidents always say that and rightly so. But it ill behoves the Russians to talk about military intervention after they have dismembered both Georgia and Ukraine," Mr Abrams told reporters at the United Nations ahead of a Security Council meeting on Venezuela.

Venezuela, which has been plunged into political turmoil, was rocked by violent clashes at the weekend.

The US and a raft of other countries have backed the country's opposition, while China and Russia have stood by Mr Maduro's government.

Mr Patrushev said the US had asked Russia for consultations on Venezuela and that Russia had agreed, but that US officials had repeatedly postponed them under false pretexts.

US officials have previously dismissed Russian allegations about US plans for Venezuela as baseless "propaganda".

Mr Abrams has said he hopes the UN Security Council will vote this week on a resolution calling for Venezuela to allow the entry of humanitarian assistance into the country.

Mr Abrams also told reporters that the US would impose more sanctions on Caracas this week and next to bring additional pressure on the government of Mr Maduro.

"We’ll have a (Security Council) resolution this week which will certainly call for the admission of humanitarian aid into Venezuela and will comment on the events of the last few days," he told reporters.

His comments came days after troops loyal to Mr Maduro violently drove back US-backed foreign aid convoys from the border on Saturday, killing two protesters and prompting opposition leader Juan Guaido to propose that the US consider "all options" to oust him.

The United States has been pushing the 15-member Security Council to formally call for free, fair and credible presidential elections in Venezuela with international observers, a move that prompted Russia to propose a rival draft resolution. 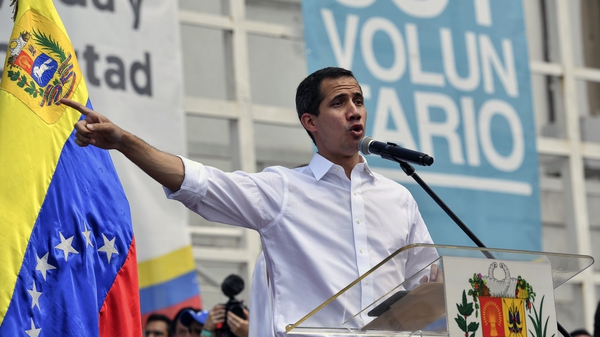