European Commission President Jean-Claude Juncker has said Ireland will not be left alone and the European Union is ready to assist Ireland in the event of a no-deal Brexit.

"We are ready to assist Irish farmers and others", he told a press conference in Brussels.

He said he did not think a no-deal situation was the most probable one and while alternative arrangements could be considered for the future, the backstop cannot be replaced.

He said his working assumption is not a no-deal Brexit.

Also speaking in Brussels, Mr Varadkar said he was confident a solution can be found to the current impasse on Brexit.

He said Ireland was increasingly prepared for a no-deal Brexit. He said such a prospect was coming from the UK, not the EU, and Britain can request an extension to Article 50.

However, he said there were no preparations being made for infrastructure on the Irish border.

The Taoiseach said the European Union had been very creative drawing up the Withdrawal Agreement, but he said it was now up to those who created the issue to be creative.

He also reiterated that the political declaration on the future relationship can be enhanced.

President ⁦@JunckerEU⁩ welcomes Taoiseach ⁦@campaignforleo⁩. Nobody should underestimate our unity and our solidarity with  #Ireland. pic.twitter.com/zGdcPfChmi 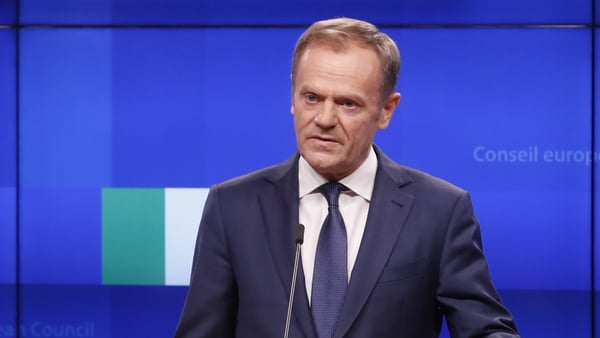 'Special place in hell' for Brexiteers without a plan - Tusk Brexit