Four families have been left broken, shattered, devastated and bereft, a whole community is numbed and the whole nation stunned, the funeral of one of the four men who died in a car crash in Co Donegal on Sunday night has heard.

The funerals for four young men who were killed in the crash have taken place in three parishes in the county today.

The first of the funeral masses was for 22-year-old Shaun Harkin, which took place in Gort an Choirce (Gortahork) this morning.

A guard of honour from CLG Chloich Cheann Fhaola, Glenea Utd and the local national and secondary schools lined the avenue as the hearse carried his coffin drove to Christ the King Church.

A guard of honour as Shaun Harkin’s funeral cortège travels to Christ the King Church in Gort an Choirce, Donegal | https://t.co/MrJjnxXJzy pic.twitter.com/DxmVpgA79D

Fr Seán Ó Gallchóir told mourners that this was the beginning of a terrible, tragic, traumatic and tear-filled day.

This is one of the darkest and saddest days in the history of the community in Donegal as we say farewell to our many young men of 20, snatched from us in the prime of life and bloom of youth, he said.

Fr Ó Gallchóir described Shaun as a happy young man and wise beyond his years. Gifts brought to the altar included a photograph of Shaun, a pliers from his work as an apprentice electrician and a mobile phone.

Fr Ó Gallchóir welcomed eight young men who had travelled home from Australia for the funerals, even though they had just been home for Christmas.

He said they will go to three other funerals today and this gives great witness to the preciousness and sacredness of life - the great value of loyalty and goodness of youth that is often maligned.

In Dún Lúiche (Dunlewy), friends of Mícheál Roarty accompanied his coffin to the Church of the Sacred Heart for his requiem mass. 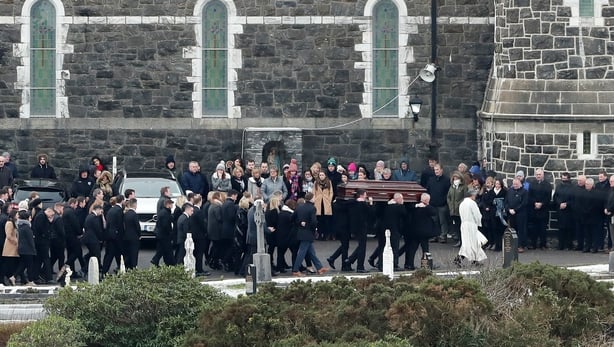 They carried with them the three trophies won by the Gaoth Dobhair (Gweedore) team in the past season and his coffin was draped in the club's green and white flag.

In their eulogy, Mícheál's cousins Angela and Cathal said the GAA was: "the beginning, middle and end of Roycee's life. The Gaoth Dobhair and Donegal teams were everything to him."

Chief celebrant Fr Brian Ó Fearraigh described the sorrow and loss felt by Mícheál's family and friends as being "as great as the majestic mountain of Errigal and as deep as the nearby lake of Dún Lúiche, lying quietly in this glen".

At St Fíonán's Church in Fál Carrach (Falcarragh), hundreds of mourners came to bid farewell to the second eldest of the four men, John Harley, who was 24 years old. He would have turned 25 next month.

He was from the nearby townland of An Cheathrú Cheanainn and the local Cloich Cheann Fhaola GAA club and members of Glenea soccer club formed a guard of honour as the funeral arrived. 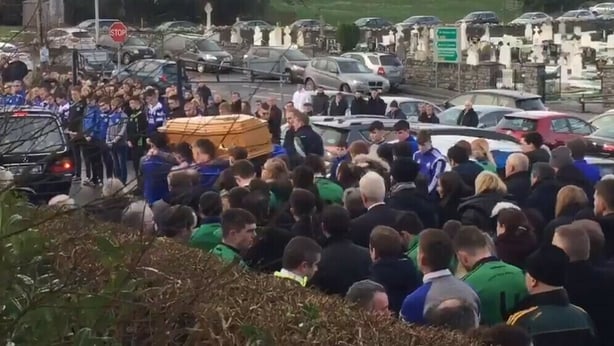 Joined by Bishop of Raphoe Alan Mc Guckian, parish priest Fr James Gillespie said there had been a silence, stillness and numbness in the community after the tragedy on Sunday.

Offering his support and that of the community to John’s parents,  Ann and Gerry, his brother Mark and his grandmother Mary, he said that John was a man full of life who had achieved as much in one short life as others would in two long ones.

He was a born leader on and off the GAA and soccer pitch, mourners heard.

When John was asked by others why he would not turn up for football training, he would answer jokingly that training is only for those who need to improve, said Fr Gillespie.

As John was laid to rest in the local cemetery, many of the mourners left for the funeral of 23-year-old Daniel Scott in Gort an Choirce.

Fr Ó Gallchóir said he was one of four fine young men in the prime of their life who have been taken away forever in one foul swoop.

The tragedy he said has left four families broken, shattered, devastated and bereft - a whole community numbed and in shock and the whole nation stunned.

Fr Ó Gallchóir spoke of Daniel's intellect, he studied in LYIT and in Glasgow and worked at home and abroad, including in Denmark where he was due to start a new job soon.

He worked hard and conscientiously he said, but did not like the bog - he was a dapper dresser, a man of style who loved his football.

Daniel Scott will be buried in the cemetery across the street from the church in Gort an Choirce where Shaun Harkin was laid to rest earlier this morning.

"The car as we can see is a lethal weapon. We know that life is busy, life is hectic, we are all in a rush, we all have deadlines but deadlines can sometimes lead to dead lives," he said.

The four friends had been travelling together in a Toyota Corolla hatchback when it crashed near Machaire Rabhartaigh.

There was no other car involved in the crash, which happened near a bridge on a minor road.

The emergency services were alerted to the tragedy at 8.40pm on Sunday but the four men were pronounced dead at the scene.

In Sydney, around 100 people from Donegal attended a mass for the four men yesterday.

The mass at Our Lady of the Sacred Heart Church was organised by one of their friends, Daniel McGeever. 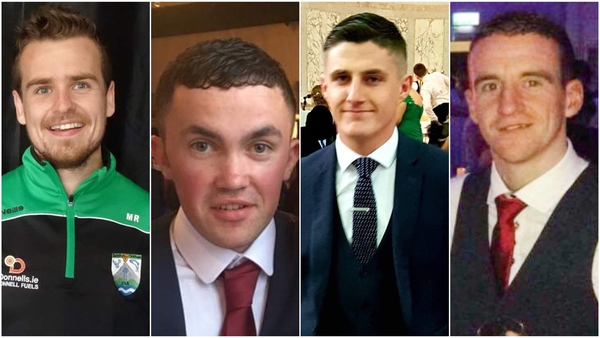