Cork City's footprint is set to quadruple following the passing of legislation that will see the first extension to the city's boundary in 50 years.

The city's population is now set to grow by 85,000 to 220,000 with the inclusion of Ballincollig, Blarney, Glanmire, Douglas, as well as Cork Airport and its surrounds. 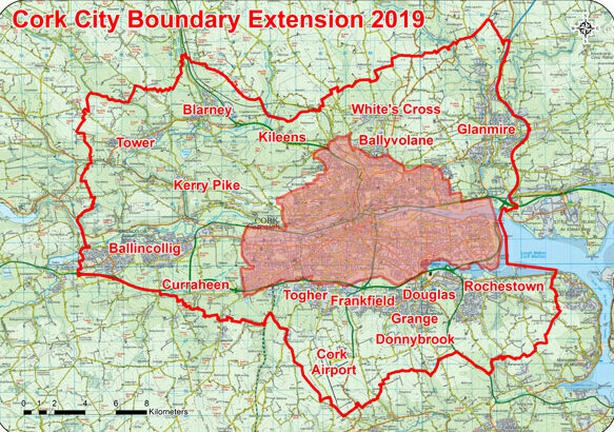 Lord Mayor Councillor Mick Finn said the expansion would have "hugely positive implications for housing, transport and other infrastructural development and investment in the years ahead".

Two transition teams from both local authorities are overseeing arrangements for the extension, which include the transfer of more than 200 staff from the county to the city.

It will also see the transfer of more than 400 services - from housing rents and road maintenance, litter picking to graveyard maintenance - to Cork City Council.

The thorny issue of compensation for the loss of significant revenues to Cork County Council remains under discussion.

The boundary change will also affect electoral areas in the city, with the reduction of the current six electoral wards to five and the transfer of an electorate of 60,000.

The number of city and county councillors will remain the same at 55 in Cork County and 31 in Cork City Council.

The legislation has yet to be signed into law by President Michael D Higgins.

If it is, Cork City Council Director of Services, David Joyce said the new boundary would most likely come into force on 4 June following May's local elections.