Taoiseach Leo Varadkar has said Ireland is willing to consider proposals for a review clause in relation to the backstop for the Irish border.

The backstop is designed to avoid a hard border on the island of Ireland post-Brexit.

In a statement released following an earlier phone call with British Prime Minister Theresa May, Mr Varadkar said that the outcome of any such review "could not involve a unilateral decision to end the backstop".

He recalled to Mrs May "the prior commitments made that the backstop must apply 'unless and until' alternative arrangements are agreed".

In a statement, Downing Street said Mrs May told the Taoiseach that there would need to be a mechanism to bring a temporary backstop, if it is needed, to an end.

It said she reaffirmed the UK's commitment to avoiding a hard border, and both leaders agreed that discussions should continue.

Mr Varadkar earlier said the Government cannot countenance any limit on a backstop.

Speaking at the opening of a social housing development in Ballymun, Mr Varadkar said that a backstop with a three-month time limit would not be worth the paper it is written on.

He said the British government needed to honour the commitments it signed up to last year.

Mr Varadkar said that in many ways, the United Kingdom was a divided kingdom, and that people are split 50-50 on whether they want to leave the EU or not.

He also said that the British cabinet, government and parliament seemed divided, and that has made reaching an agreement very difficult.

Mr Varadkar said he would much prefer to have a United Kingdom, a united country to be a partner in the negotiations but "we just have to work through that and get an agreement".

The exchanges come after several EU sources had cast doubt on whether a breakthrough can be reached this week on the backstop in the Brexit negotiations.

RTÉ News understands that a fundamental gap remains between the EU and UK over the nature of the backstop, and how long it will last.

The points of contention appear to be whether there will be one or two backstops.

London is pushing for a single UK-wide customs arrangement, with additional measures for Northern Ireland to cover regulatory controls, as the single entity that will avoid a hard border on the island of Ireland.

Ireland and the EU believe that a Northern Ireland-specific backstop should remain as the final safety net to avoid a hard border if other solutions fail.

"It's not clear if there will be two separate constructions and they overlap," says a senior source briefed on the negotiations, "or if it will be a single construction and it just has a part that goes deeper for Northern Ireland."

It is understood that much hinges on whether or not there is a termination clause, which is reportedly being pushed by UK Brexit Secretary Dominic Raab.

Both the Financial Times and the Daily Telegraph reported this morning that Mr Raab is insisting on a time limit for a UK-wide customs backstop. 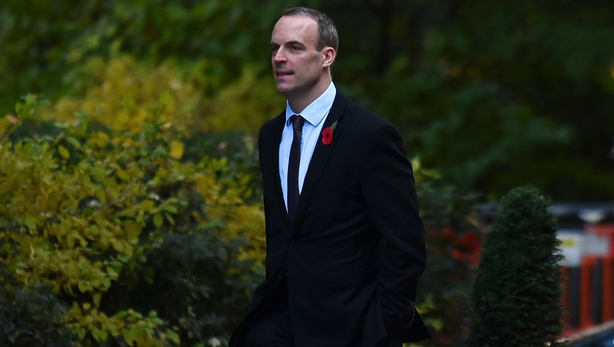 The Daily Telegraph reported that Mr Raab has demanded a three-month time limit, while the Financial Times said Mr Raab had written to Mrs May saying that both London and Dublin could "accept" a clause allowing the UK to pull out of a UK-wide customs arrangement with three months notice.

On Twitter, Minister for Foreign Affairs Simon Coveney said the Irish position remained consistent and very clear, that a "time-limited backstop" or a backstop that could be ended by UK unilaterally would never be agreed to by Ireland or the EU.

"These ideas are not backstops at all," he said, "and don't deliver on previous UK commitments."

The Irish position remains consistent and v clear⁩ that a "time-limited backstop" or a backstop that could be ended by UK unilaterally would never be agreed to by IRE or EU. These ideas are not backstops at all + don’t deliver on previous UK commitments ⁦⁦#Brexit pic.twitter.com/y7AQ8V1jMo

According to several sources, the EU has conceded that there can be a "bare bones" customs union outline that would be inserted into the Irish Protocol of the Withdrawal Agreement, or divorce treaty.

This would be a UK-wide arrangement, meaning there would be no differentiation between Northern Ireland and the rest of the UK when it came to customs controls.

However, a customs union alone will not remove the need for all checks and controls.

A spokesman for Mrs May has said that the UK does not want a backstop to be in place indefinitely, and that they are looking for a mechanism to deal with it.

He said that any customs border in the Irish Sea would be unacceptable.

The spokesman also said that negotiations are ongoing, and that there is good progress in the talks. However, he said that there was still work to do.

Q&A: What is the Brexit 'backstop'?
A brief history of the backstop
More Brexit stories

In May, the European Commission issued a circular to member states which spelled out that "in the case of a customs union, the levying of customs duties is removed and proof of free circulation is required instead of rules of origin," but that "all other checks and controls are still necessary."

A range of other regulatory compliance checks would be required for the safety of industrial goods, certain food products from third countries, medical devices and other products.

One senior Irish source dismissed reports that there would only be one backstop, ie the UK-wide customs arrangement, with add-ons for Northern Ireland to take account of the above requirements.

"There's no question of subordinating or dissolving the Northern Ireland backstop. As far as Northern Ireland is concerned, and the land border on the island of Ireland, the backstop must be legally operable, and it must apply unless and until [something better is agreed to avoid a hard border].

However, the question of a termination clause for a UK-wide customs arrangement appears to be a key sticking point.

Officials say that the more the UK insists on a termination clause, then the stronger the requirement for a Northern Ireland-specific backstop.

"Basically, the more flexibility you have to terminate, or terminate on your own terms for the UK dimension, the stronger the necessity of having a Northern Ireland only backstop that kicks in in that event. You can't have both. You can't have a termination on one, and not have the other," says one EU official.

One EU diplomat described weekend newspaper reports in the UK that a deal was imminent as "test balloons being floated above the Thames to see how they will land, what will work and what won't work."

Several Brussels-based sources say the British cabinet is still divided and that the real negotiations will only conclude once those divisions have been overcome.

Minister for Finance Paschal Donohoe said any review of the operation of the backstop would have to be agreed by all sides.

Speaking on his arrival at a eurogroup meeting in Brussels, Mr Donohoe said: "Crucially, such a review has two pieces of context.

"The first one is, it has to be something that can only happen if all the different parties to it want to see a role in making that review happen, and secondly it can only happen in the context of an actual backstop being in place."

Mr Donohoe added: "What is important is that we support the [European] Commission in the work that they are doing at the moment, in relation to trying to get agreement on a backstop agreement and how it would operate.

"The British government have given commitments twice now over the last year in relation to recognising the need for a backstop, and they have affirmed now on many, many different occasions  the commitment they have to ensuring there's no possibility of a hard border returning on our island.

"We want to see that commitment honoured. I believe Prime Minister May is approaching this issue in good faith, but in order for that commitment to be honoured, the Government and the European Union need to see a backstop in place that can cater for changes that might happen in the future."

Sinn Féin President Mary Lou McDonald said that she fully expects the promises and commitments, made last December to protect Ireland following Brexit, will be honoured.

Ms McDonald said it was the job of the Taoiseach to ensure that the commitments are followed through.

She was speaking at Belfast City Hall prior to a meeting with business leaders from Northern Ireland to discuss Brexit.

Dublin forests will change use to recreational only

NBRU calls for Metro and BusConnects projects to be abandoned