Oscar-winning screenwriter and director Neil Jordan has donated his archive to the National Library of Ireland.

The Sligo-born director achieved international critical acclaim for his films, including 'Michael Collins', 'The Butcher Boy', and 'Breakfast on Pluto'.

He won an Academy Award for Best Original Screenplay for 'The Crying Game'.

More than 123 archival boxes of material have been donated to the National Library, including film and TV scripts, production files, storyboards, notebooks and personal correspondence with artistic collaborators and political figures.

Amongst the collection is a letter from actor Christian Slater, thanking Mr Jordan for his part of Daniel Molloy in the film 'Interview with the Vampire', but wishing the casting circumstances were different. 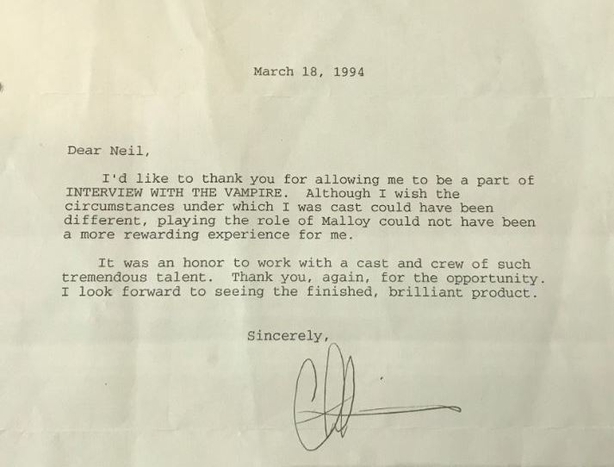 River Phoenix was originally cast for the role, but he died of a drug overdose four weeks before filming commenced.

Slater was then cast and later donated his salary towards the River Phoenix Center for Peacebuilding.

Many of the documents donated relate to the production of 'Michael Collins', including a poster seeking to recruit 5,000 male extras for the filming of a recreation of Bloody Sunday.

The 1995 poster advises that only men are sought, but women are welcome if they are dressed in men's clothes.

It called on those wishing to be cast to only wear dark pants and coats with no jeans, runners or watches.

National Library Director Sandra Collins said it would take archivists around a year to sort through the documents and to digitise them for online use.

She said it was hugely important that the collection remained in Ireland, as various US institutions were interested in obtaining the archive.

As Neil Jordan donates his archive to @NLIreland a timely look back #OnThisDay 23 years ago when 4,000 extras arrived on the set of the Michael Collins film https://t.co/eXg8NVkYCy

ASTI to ballot members on Govt proposals over pay

Harris calls for apologies to Fitzgerald over exit