US First Lady Melania Trump has made a surprise visit to the US-Mexican border, as her husband's administration seeks to quell a firestorm over immigrant family separations.

President Donald Trump first announced the trip by his wife, who was touring a non-profit social services centre for immigrant children, before heading to a customs and border patrol processing centre, according to a statement from her office.

The first lady landed in McAllen, Texas, under a heavy downpour, her motorcade driving through deep water as it headed for the Upbring New Hope Children's Shelter, a federally-funded facility that houses around 60 children from Honduras and El Salvador, ages five to 17.

Her visit comes a day after Mr Trump took executive action to end the practice of separating migrant families at the border, the result of a "zero tolerance" policy towards illegal border crossers.

Images and recordings of wailing children detained in cage-like enclosures has ignited global outrage, and Melania Trump herself had called for a political compromise to end the separations.

"This was 100% her idea. She absolutely wanted to come," Stephanie Grisham, the first lady's communications director, told reporters travelling with her to Texas.

"She wanted to see everything for herself," Ms Grisham said. "She supports family reunification. She thinks that it's important that children stay with their families."

However, the jacket Mrs Trump wore for the trip conveyed a different message.

"I REALLY DON'T CARE, DO U?" was daubed on the back of her jacket in large white brush strokes.

The trip to Texas was the most high-profile public appearance the first lady had made since undergoing a surgical procedure for a kidney condition on 14 May.

Mrs Trump wore a hooded green khaki jacket designed by fashion chain Zara as she boarded her flight to Texas in front of news photographers.

"It's a jacket," Ms Grisham told reporters. "There was no hidden message. After today's important visit to Texas, I hope the media isn't going to choose to focus on her wardrobe." 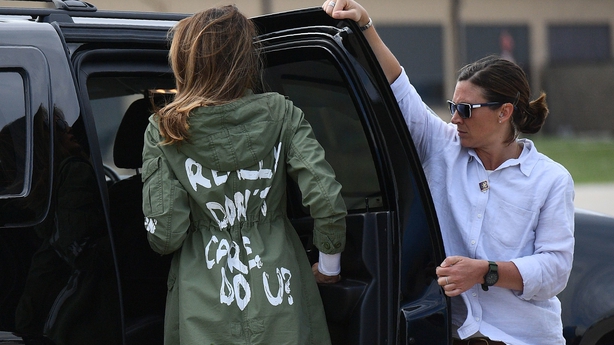 Separately, Mr Trump said he was directing federal agencies to begin reuniting children and parents who had been separated at the US-Mexico border after entering the country illegally, a first step to implementing his executive order reversing a policy that had drawn global condemnation.

Mr Trump said at a cabinet meeting that he had directed the departments of Justice, Homeland Security and Health and Human Services "to work together to keep illegal immigrant families together during the immigration process and to reunite these previously separated groups".

Facing international outcry over the separation policy, Mr Trump signed an executive order yesterday to stop the separations and keep families together during immigration proceedings.

The order still faces possible legal challenges and administration lawyers were expected to file a request to modify a 1997 court settlement that limits the government's detention of minors to 20 days.

Mr Trump's order, an unusual reversal by him, moves parents with children to the front of the line for immigration proceedings, but it does not end a 10-week-old "zero tolerance" policy that calls for the prosecution of immigrants crossing the border illegally under the country's criminal entry statute.

The administration has also called for a permanent legislative fix but congressional Republicans said the House was likely to reject two immigration bills designed to halt the practice of splitting up families and address a range of other immigration issues.

Republican US Representatives Ralph Norman and Mark Meadows, prominent members of the conservative Freedom Caucus, told reporters they did not think either of the bills had enough support to pass the Republican-controlled House.

"There is still some work to be done as we grapple with the immigration issues," Mr Meadows said.

House Speaker Paul Ryan said Republicans still were trying to round up votes but he did not sound confident.

"We were never going to be able to promise an outcome but we could promise an effort and a fair process and that is what is being delivered on today," he said.

Both House bills, backed by Mr Trump but opposed by Democrats and immigration advocacy groups, would fund the wall Trump has proposed along the US border with Mexico and reduce legal migration, in part by denying visas for some relatives of US residents and citizens living abroad.

The more conservative bill would deny the chance of future citizenship to "dreamers" - immigrants brought illegally into the United States years ago when they were children.

Even if a bill clears the House, it would face an uncertain future in the Senate, where lawmakers are considering different measures and where Republicans would need at least nine senators from the Democratic caucus to join them to ensure any bill could overcome procedural hurdles.

"What is the purpose of the House doing good immigration bills when you need 9 votes by Democrats in the Senate, and the Dems are only looking to Obstruct," Mr Trump said in a tweet today as he renewed his call for a change in Senate rules to allow legislation to move with a simple majority.

Mr Coveney said the US was a global leader in human rights in the past and the images seen in recent days were the not image Ireland wanted to see or  expect to see coming from the United States.

Separately, a group of people held a protest outside the US Embassy in Dublin this afternoon. 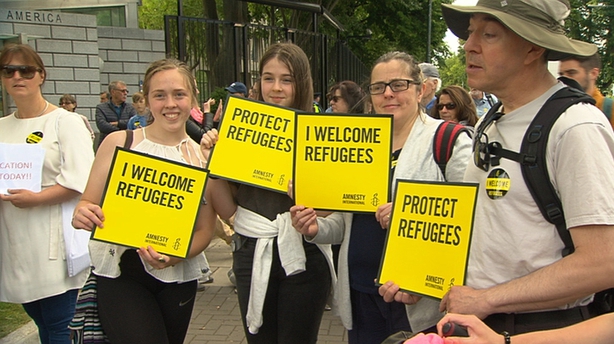 The rally was held to protest against Mr Trump's border policy, among other policies of the US president.