Taoiseach Leo Varadkar has told MEPs in the European Parliament that the EU is at a decisive point in its future but ready with a renewed appetite to face the challenges of the future.

It is the first in a series of debates between EU government leaders and MEPs on the future of the European Union.

Mr Varadkar said it is likely that the majority of people living in Northern Ireland will remain European citizens after Brexit because of their unique status as dual Irish-British citizens under the Good Friday Agreement.

He said it is hard to imagine that agreement being made without "our shared membership of the European Union and the Single Market".

He said that the breakthrough agreed in Brexit negotiations late last year means that the UK has guaranteed that a "hard border on the island of Ireland will be avoided. The Common Travel Area and its associated rights will be maintained".

Mr Varadkar told MEPs that as the next phase of the Brexit negotiations begins, Ireland relies on their support and solidarity, he called for "no back sliding".

"For my part I hope the new relationship between the UK and the European Union is as close and deep as possible, but consistent with the need to maintain a customs market," he said.

He said the debate on the future of Europe should be approached with a positive attitude, "talking about what we want to achieve for our citizens rather than what they want to block of resist". 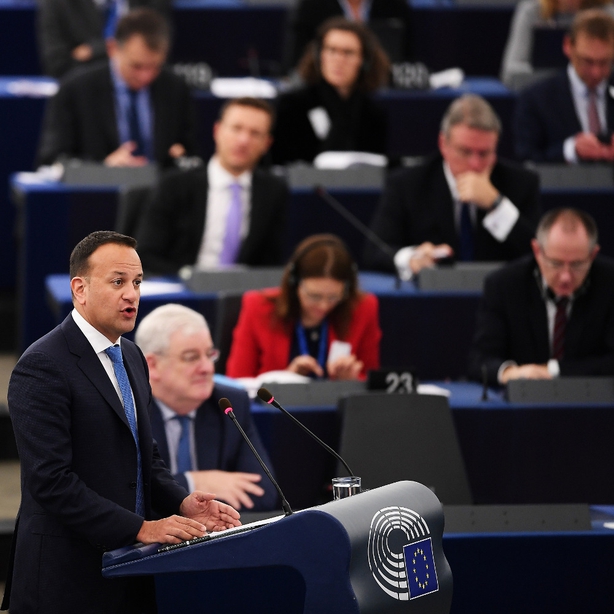 Last February, the European Parliament put forward a series of initiatives for the future development of the EU.

As part of that, the parliament's president Antonio Tajani invited the heads of governments to present their vision of the future of Europe and debate it with MEPs.

Some in Strasbourg question whether it is a coincidence in light of the Brexit negotiations that the first leader to address the parliament is the Taoiseach.

In his speech, Mr Varadkar thanked Europe for the support it has given Ireland during the negotiations.

He highlighted the role of the former SDLP leader John Hume, who was an MEP for more than 20 years and played a key role in the Northern Ireland peace process.

He said the Taoiseach has proven to be a committed European and he paid tribute to the former commissioner, Peter Sutherland, who died recently, and who he described as a giant of European politics and a friend of so many.

"He will be missed but his legacy lives on," he said.

Mr Juncker said that in the first phase of the Brexit talks, he had the privilege to have a close working relationship with the Taoiseach.

He said that when it comes to Ireland in negotiations, Europe is united. "It's all for one and one for all," he said.

He added that the EU Commission and the Government worked side by side to move to next phase of talks, adding that the partnership would "continue and grow stronger".

The European Parliament's Chief Brexit Negotiator said Ireland's voice is critical in the debate on reform of the EU.

Guy Verhofstadt said whatever stance Ireland takes in the Brexit negotiations, Europe will always be behind it.

"In these negotiations we are all Irish".

Mr Verhofstadt commended Ireland for its capacity to transform and reinvent itself over the last few decades.

He described Ireland as one of the most diverse nations of the EU and the Irish economy has successfully integrated migrants for all over the world.

UKIP MEP Nigel Farage, meanwhile, described the Taoiseach as a European Unionist and accused him of delaying the Brexit negotiations.

Mr Farage said Ireland had a lot to lose regarding trade to the UK and it seemed to him that Mr Varadkar's devotion to the European project went above the interest of Irish farmers and businesses.

He accused Mr Varadkar of being part of a "big attempt" to frustrate and overturn Brexit.

Mr Farage said smaller countries counted for nothing in Europe and that the Taoiseach's importance in Europe was down to delaying Brexit negotiations.

Taoiseach denies Ireland in 'race to the bottom' on taxation

Green MEP Philippe Lamberts challenged the Taoiseach on Ireland's corporation tax, saying there is a need to stop the race to the bottom regarding taxation and briefly referenced the Apple tax case.

He said ballooning inequality threatens the existence of civilised societies.

The Taoiseach said the Government's view is that national tax should fund national governments.

He gave the example of the United States within which there is tax competitiveness between different member states and questioned why European states could not do the same.

On the Apple case, the Taoiseach stressed that it is a State aid case and not a tax case and said the European Court of Justice would judge on it.

He added that Ireland would not win a race to the bottom on taxation and that other countries have lower tax rates than Ireland.