There has been widespread condemnation of comments attributed to US President Donald Trump describing Haiti and some African nations as "sh**holes".

The remarks are reported to have been made during a White House briefing on an immigration plan prepared by a group of senators and how it impacted immigrants from various countries, including those in Africa.

A source who was briefed on the conversation said that Mr Trump said: "Why do we want all these people from Africa here? They're sh**hole countries ... We should have more people from Norway."

A second source familiar with the conversation, said Mr Trump, who has vowed to clamp down on illegal immigration, also questioned the need for Haitians in the United States.

However, Mr Trump later implied in a series of tweets that he did not describe African and other states as "sh**thole countries".

Reacting to the reports, Haiti's government said it was "profoundly outraged and shocked" over what it described as Mr Trump's "racist" comments.

The Haitian government said that, if the comments were made, they reflected a "racist" view of the Haitian community and its contribution to the US.

Never said anything derogatory about Haitians other than Haiti is, obviously, a very poor and troubled country. Never said "take them out." Made up by Dems. I have a wonderful relationship with Haitians. Probably should record future meetings - unfortunately, no trust! 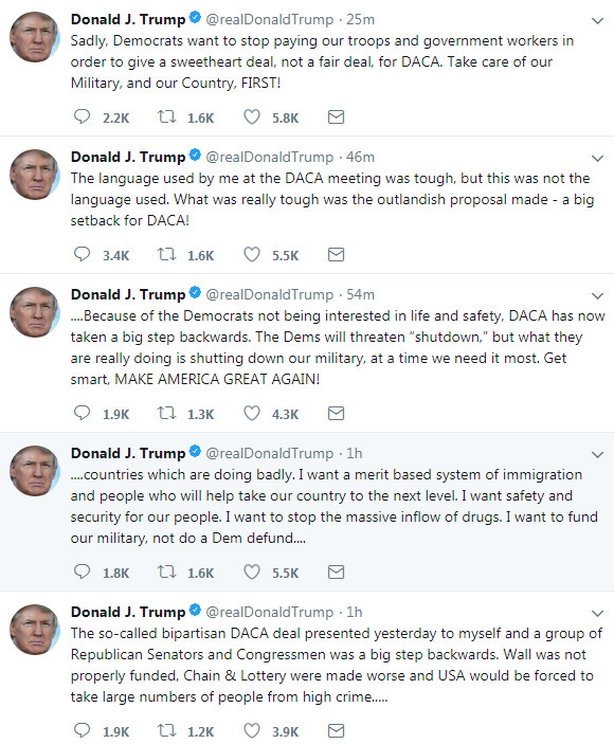 Rupert Colville said: "If confirmed, these are shocking and shameful comments from the President of the United States. Sorry, but there is no other word one can use but 'racist'.

"You cannot dismiss entire countries and continents as 'sh**tholes', whose entire populations who are not white, are therefore not welcome."

Many Democrats and some Republican politicians criticised the president for his remarks.

Republican US Representative Mia Love, a daughter of Haitian immigrants, said the comments were "unkind, divisive, elitist, and fly in the face of our nation's values" and called on Mr Trump to apologise to the American people and to the countries he denigrated.

The Democrats seem intent on having people and drugs pour into our country from the Southern Border, risking thousands of lives in the process. It is my duty to protect the lives and safety of all Americans. We must build a Great Wall, think Merit and end Lottery & Chain. USA!

The programme that was being discussed at the White House is called Temporary Protected Status (TPS).

In November, the Trump administration decided to end the status for immigrants from Haiti and Nicaragua.

It gave the approximately 59,000 Haitian immigrants who had been granted the status until July 2019 to return home or legalise their presence in the United States. Nicaraguans were given until January 2019.

This week, Mr Trump moved to end the status for immigrants from El Salvador, which could result in 200,000 Salvadorans legally in the United States being deported, beginning in September of next year.

The bipartisan Senate plan would attempt to maintain TPS in return for ending or changing a "diversity" lottery programme that has been aimed at allowing up to 50,000 people a year from countries with few emigrants to the United States.

"Like other nations that have merit-based immigration, President Trump is fighting for permanent solutions that make our country stronger by welcoming those who can contribute to our society, grow our economy and assimilate into our great nation."

Another source familiar with the meeting said Mr Trump was questioning why the United States should take in unskilled labourers from the countries under discussion and should instead welcome immigrants from nations that can offer skilled workers.