New research has found that only a fifth of people in Ireland think it is safe to eat genetically modified foods.

The survey, carried out by Amarach Research on behalf of Science Foundation Ireland as part of Science Week, also found just under two thirds of the public polled think vaccinations are an acceptable form of preventative medical treatment.

The survey was carried out among 1,000 adults and 238 members of the scientific community last month.

Science Foundation Ireland wanted to gauge public attitudes to science and see to what extent these views differed among scientists.

On climate change, the poll found a little over two thirds of the public surveyed agreed that Earth was getting warmer as a result of climate change, compared to 92% of scientists.

Similar numbers agreed that climate change was mostly due to human activity.

Over half of the public surveyed thought it was not safe to eat foods grown using pesticides and 43% also thought genetically modified foods were not safe to eat, which was a much higher percentage than among the science community.

Overall, the survey found 89% of scientists and 64% of the public agreed or strongly agreed that science has had a positive impact on people's lives in Ireland.

While two thirds of the public surveyed agreed that vaccinations were an acceptable form of preventative medical treatment, among the science community the level of approval was much higher at 95%. 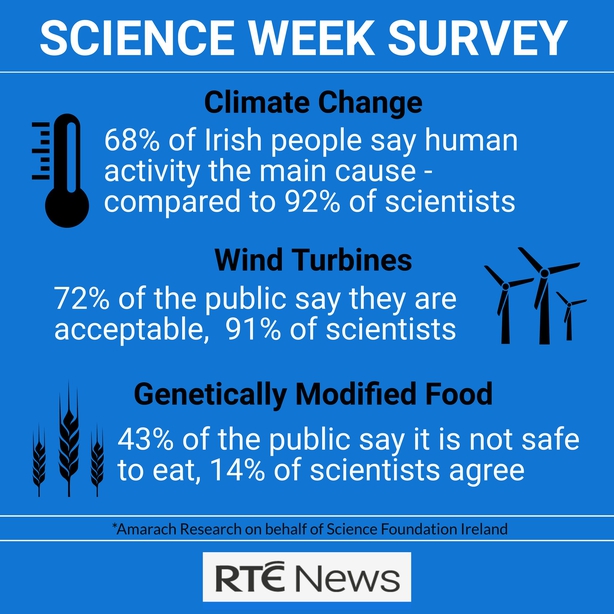 On the great question of life, 29% of the public surveyed agreed that humans evolved over time guided by a supreme being, compared to 12% of the science community.

While 55% of the Irish public surveyed believed that life on earth, including humans, evolved through a process of natural selection.

Not surprisingly, the proportion of Irish scientists sharing a similar view was considerably higher at 92%.

Just 44% of the public respondents said they agreed or agreed strongly that the universe was created by a big explosion almost 14 billion years ago.

Almost three quarters of the members of the public who responded to the poll agreed or strongly agreed that wind turbine farms are an acceptable form of energy.

"This survey showed that Irish people are proud of Irish science achievements and that they want to know more about the research that is happening in Ireland now, and what we have achieved in the past," said Dr Ruth Freeman, Director of Strategy and Communications at Science Foundation Ireland.

"This survey reinforces that people want to understand more about science and to engage further with it - 60% of the public said they were interested in science news."