The funeral of former taoiseach Liam Cosgrave took place in Dublin this afternoon.

In accordance with the wishes of the Cosgrave family, it was not a State funeral.

Mr Cosgrave's requiem mass took place at the Church of the Annunciation in Rathfarnham and he was laid to rest afterwards at Goldenbridge Cemetery in Inchicore.

In his public life, the late statesman was a figure of great integrity and a true patriot, Monsignor John Wilson told mourners.

He said: "Liam left our country a better place as a result of his life and his life's work."

The State funeral for his father, WT Cosgrave, the country's first head of government, took place 52 years ago at the same church and cemetery. 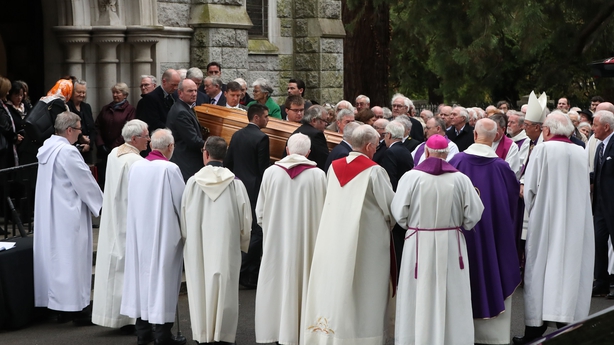 Military policemen carried the coffin, which was not draped in the tricolour, into the church this morning.

The Army band led the funeral procession to the cemetery after the mass.

A firing party fired a three volley salvo close to the grave and the Last Post and Reveille was performed after the burial.

Archbishop of Dublin and Primate of Ireland Diarmuid Martin was one of the celebrants of the mass.

Mr Cosgrave was a devout Catholic, and family friend of 50 years Monsignor Wilson presided over the service.

"He was a patriot in the very best sense of that term."

He said he had great humility.

"Integrity was the hallmark of his private life and his public life." 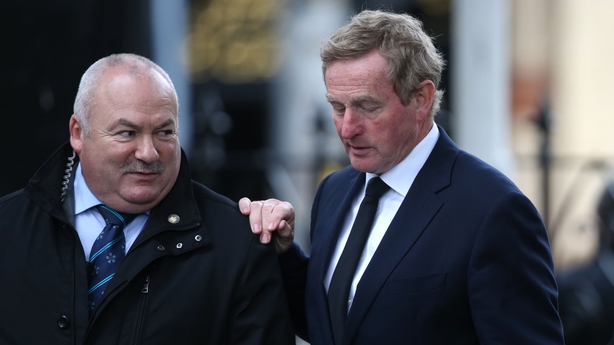 Mr Cosgrave died last Wednesday at the age of 97.

Tributes were paid to the former Fine Gael leader in the Dáil this week, where he was described as a man with a clear view of his country, his religion and his politics.

Mr Cosgrave was taoiseach for some of the most turbulent years of the Northern Ireland Troubles.

He has been described as a consistent and courageous voice against terrorism.

He was at the head of government on 17 May 1974, when loyalists killed 33 people in the Dublin-Monaghan bombings, including a pregnant woman at full term.

Mr Cosgrave covered the cost of his father's State funeral in 1965.