RTÉ News understands that the report, which runs to just under 30 pages, advised that Stepaside should re-open primarily due to the population growth in the area.

Three other stations were listed as "likely" to be recommended for re-opening in a further final report that would go before Government at a later date.

They were, Rush in Co Dublin, Donard in Co Wicklow, and Leighlinbridge in Co Carlow.

Opposition parties are likely to say this report reached the conclusion the Government wanted.

A Department of Justice spokesperson has said the report will be published, with some redactions, possibly as early as tomorrow.

On Thursday, the Acting Garda Commissioner told the Oireachtas Public Accounts Committee that the controversial decision to re-open Stepaside Garda Station was recommended in the interim report submitted to the Government in July.

Yesterday, Taoiseach Leo Varadkar said he had no problem with the report being published.

Speaking in Tallinn where he is attending a meeting of EU leaders, he said the Programme for Government contained a commitment to open six garda stations on a pilot basis.

"Those six have been identified and they're going to be opened. Stepaside is not yet open but it will be," he said.

Earlier yesterday, the chairman of PAC accused the Government of "infecting" An Garda Síochána's decision-making process in relation to the re-opening of Stepaside.

Speaking on RTÉ's Morning Ireland, Seán Fleming said politicians had a clear agenda and got "the cover of the garda report" to push that agenda.

Minister Ross (below) has denied so-called "stroke politics" was involved in the decision to re-open the south county Dublin station. 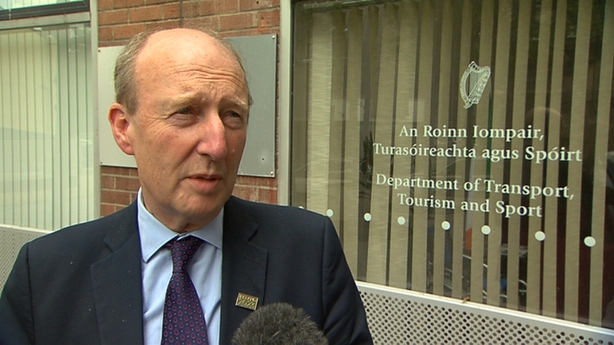 The station, which is in the minister's constituency, was one of 139 stations closed as part of cost-cutting measures.

Speaking on RTÉ's Prime Time on Thursday, the minister said that "the Government decision to close garda stations was wrong, and the worst case of it in the country was on my doorstep".

Mr Ross added that he campaigned for the re-opening and as part of the Programme for Government, he did what he promised he would do, which was to reverse Government policy on the closure of garda stations.

Mr Fleming said that Acting Commissioner Dónall Ó Cualáin had given very factual information to the PAC and the nuance of what he said was lost in the reporting of the politics of the matter.

Mr Fleming said that the Government, for political reasons, had "overly influenced" the garda decision.

He said this was damaging to the gardaí and the Department of Justice and the simple solution is to publish the interim report.

The Laois TD said there is no reason not to publish it, adding what is in the report is more nuanced and will help to clear up the confusion.

He said the Government should not be "using and abusing the gardaí" and if it wanted to make a political decision to re-open one garda station it should have made that call on its own merits.

Mr Fleming added that the Acting Commissioner had told the PAC the report had Stepaside top of the list for early opening, as well as recommending four stations to reopen.

He said the Government then accepted that would mean Stepaside would re-open.

Sinn Féin has accused the Cabinet of "cherry picking" the report and prioritising Stepaside to re-open for political reasons.

The party has called on the Government to publish the interim report.

Labour TD Alan Kelly, also a member of the PAC, has said it will be a serious issues for the Government if it can not provide the evidence and documentation to prove the decision to re-open Stepaside Garda Station.

Speaking on RTÉ's Today with Sean O'Rourke, Mr Kelly said he believed it was a political decision, where criteria was set by the Department of Justice.

Speaking on the same programme, he said it has been made clear that Stepaside would be a pilot scheme, and that it being "cherry-picked" was not the case.

He said he does not think it was "stroke politics" and there is no indication it was.