European Council President Donald Tusk has said progress in talks on Britain's impending exit from the European Union has not been sufficient to allow negotiators to move on to the next stage of discussing the future partnership between Britain and the EU.

Mr Tusk was speaking to the media after meeting with British Prime Minister Theresa May at Downing Street.

Mr Tusk said he welcomed a new constructive and realistic tone from the British government, adding that "this shows that the philosophy of having a cake and eating it is finally coming at an end, at least I hope so."

"We will discuss our future relations with the UK once there is so-called sufficient progress," he said.

"The sides are working and we work hard at it. But if you ask me... I would say there's no sufficient progress yet, but we will work on it." 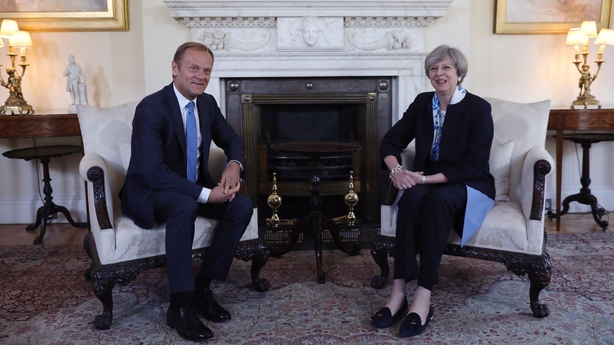 A Number 10 spokesperson said that during the meetingMrs May restated her wish for a bold and unique new economic partnership with the EU, based on a joint commitment to free trade and high standards.

They added that the Prime Minister said the UK and the EU should be imaginative and creative about the way this new relationship is established.

Mrs May said she was optimistic about a joint future which benefits both the EU and the UK.

Mrs May and Mr Tusk both welcomed the good progress that had been made on citizens' rights in the talks so far, and restated their commitment to finding a positive solution to the issue of the Irish border.

Mrs May also stressed the importance of agreeing a period of implementation once Britain leaves the EU in March 2019.

She said this would build a bridge to that new relationship that ensures the process is smooth and orderly and creates as much certainty as possible for everyone.

At the end of the meeting, the British Prime Minister said her Florence speech had been intended to create momentum in the ongoing talks.

She said it was important for EU negotiators to now respond in the same spirit.

Mr Tusk's announcement comes just weeks before the council decides whether or not enough progress has been made in this strand of Brexit talks to move to the next phase.

The two agreed to the meeting last week at the United Nations General assembly in New York.

The current phase of Brexit talks deals with the Irish border, the Brexit divorce bill and the rights of EU citizens.

Yesterday the fourth round of Brexit negotiations got under way in Brussels.

The EU's chief negotiator Michel Barnier said he was keen and eager to see how comments by Mrs May in a Brexit speech last week could be turned into a negotiating strategy.

The Brussels talks will continue until Thursday.

Taoiseach Leo Varadkar met with Mrs May in London yesterday, the first EU leader to do so since her keynote speech on Brexit in Florence last Friday.

Following that meeting, Mr Varadkar said that it was too early to judge how much progress was made in the Brexit talks.