The funerals have taken place in Belmullet, Co Mayo for three members of the same family killed in a car crash earlier this week.

Seven-year-old Sean Wilson McGlynn, his mother Marcella Wilson and grandmother Mary Ann Wilson were killed when their car was in a collision with a truck.

The deaths have devastated the community of Binghamstown in Belmullet.

Hundreds of people gathered at the church of St Joseph this afternoon to pay their respects.

Among the chief mourners were Sean's brothers and sisters, Amy, Kelly and Anthony, his father Anthony McGlynn as well as his grandfather Josie Wilson and aunt Annette. 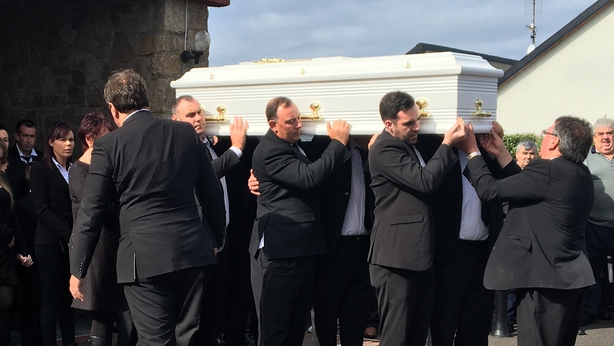 In his eulogy, Fr Kevin Hegarty spoke of the "red and green frenzy in this football obsessed county" ahead of Sunday's All-Ireland final.

Then, in an instant, he said, a darkness enveloped the community following the collision.

He described Mary Ann Wilson, a mother, grandmother and great-grandmother, as the heart of the Wilson family who spoke the language of love.

Her daughter, Marcella was described as a wonderful mother who raised her children with great courage and dignity.

Fr Hegarty said she would have rejoiced in her daughter Amy's excellent Junior Cert results this week.

Sean was described as a ball of energy and full of "divilment". His classmates were also in attendance.

Sixteen-year-old Amy described her mother as her hero and her nanny as a great personality full of humour and remembered her little brother "Seanie" with great affection.

Her words drew the congregation to its feet and there was sustained applause for her bravery.

The three family members were buried in Cross Cemetery on the Erris Peninsula.