Community centres in London have been overwhelmed with donations as volunteers and neighbours pulled together after the Grenfell Tower fire.

Churches, mosques and sports centres have opened their doors to help victims of the tragedy.

Many have been flooded with so much food, clothing and other supplies that they were turning new donations away.

Wisps of smoke could still be seen escaping from the tower block this morning as desperate residents tried to track down missing loved ones.

Missing persons posters were taped up in doorways, along with offers of help, including from celebrity chef Jamie Oliver, who offered free food at one of his nearby restaurants.

Volunteers form a human chain to move donations from one centre to another. pic.twitter.com/uUAcyRrSY4

Communities pull together to help those affected by the London tower fire pic.twitter.com/CgQ1GXbCb9

Satta Padham, of the Sikh Welfare and Awareness Team, said: "There was a lot of chaos yesterday, people were missing, a lot of people slept on floors and people brought supplies - food, clothing and essentials that they could grab on the way.

"What I remember was the smell of burning - it gets you straight in the back of the throat.

"There were a lot of people trying to help from the local area, they all knew somebody in there.

"These are real people that have lost family and lost their homes - 150 families were in the building, a lot of children and women are still missing.

"But there has been a great solidarity between people in the community."

Dozens of families spent the night in Westway Sports Centre, where the relief effort is being co-ordinated. 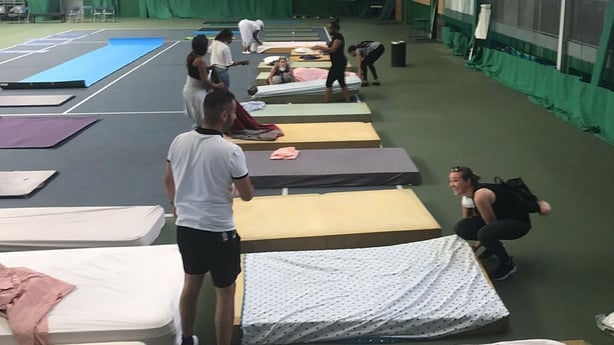 Harris Iqbal, of Penny Appeal, is helping at the leisure centre.

He said: "Over the course of the day hundreds and hundreds of people came through the doors yesterday.

"The last 24 hours have been very distressing and upsetting for everyone - the families affected and also their friends and loved ones.

"There are a number of people looking for loved ones who are missing, many have lost loved ones and are grieving.

"Others have lost their home and are extremely, extremely upset."

He added: "The community response has been phenomenal - all faith groups, mosques, churches and gurdwaras have opened their doors, charity organisations and everyone have collaborated in a way I've never seen in London before."

A church in Notting Hill. Donations overflowing, and still arriving. Council says they have too much. Im live from London on @morningireland pic.twitter.com/yI5alGJykQ

Peter Boulton, 61, spent the night in Westway Sports Centre with around 30 others after being evacuated from Treadgold House in the early hours of Wednesday.

"We were all evacuated at about 2.30am," he said. "I just sat on the pavement yesterday - I didn't know where anyone went.

"It was only at 4pm that I went to a church and found the centre - it was chaos.

"Hopefully we will be allowed back in today but until the engineer gets in there no one knows."

Mr Boulton, who has lived in the block for 15 years, added: "They spent such a lot of money and tarted up Grenfell but it seemed to be plastic and seemed to be flammable.

"I've never seen fire go up so quickly in my life. Within 20 minutes people from the 10th floor upwards didn't have a hope."