Sinn Féin's leader in Northern Ireland is to meet with British Prime Minister Theresa May tomorrow amid concerns a deal between Mrs May's Conservative Party and the DUP could undermine the Good Friday Agreement.

Mrs May has rejected claims that the potential agreement with the Democratic Unionist Party would undermine its supposed impartiality in Northern Ireland, in particular in the ongoing process to restore Stormont power-sharing.

Ms O'Neill has said she would raise the issue in London tomorrow, as well as in talks with new Fine Gael leader Leo Varadkar on Friday.

"I will be in London and Dublin over the coming days for talks with both Theresa May and the new Taoiseach, Leo Varadkar," she said.

"I will be making it very clear that any deal between the Tories and the DUP cannot be allowed to undermine the Good Friday and subsequent agreements.

"It's imperative that both Governments recommit to the word, spirit and implementation of the Good Friday Agreement if there is to be any prospect of re-establishing the Executive."

Ms O'Neill added: "Progress will not come from a deal between the DUP and Tories to prop up a Government in Westminster with an austerity and Brexit agenda but through the full implementation of the agreements and an Executive that respects the rights and delivers for all in society."

Any deal between the DUP and the Conservatives could reportedly be delayed until next week after last night's major fire in London, as well as diary commitments.

A deal had been expected to be announced today, however the BBC said that would now not happen.

The delay, it says, could possibly postpone Brexit talks due to begin next week. 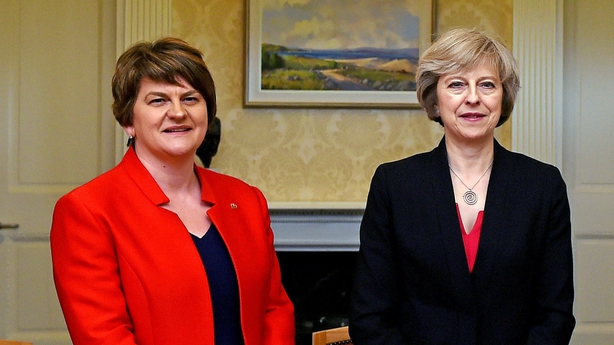 Discussions between the DUP and Mrs May on a deal to allow the Conservatives to form a minority government resumed this morning, a senior Conservative source said.

Former first minister Arlene Foster and Mrs May held more than an hour of talks yesterday.

Mrs Foster had said the discussions were "going well" and that she hopes for a "successful conclusion" soon.

Speaking last night, Mrs May described talks with the DUP as productive, saying she wanted to give stability to the UK.

Mrs May was in France for talks with French President Emmanuel Macron who said he wanted to see Brexit negotiations start as soon as possible.

Following talks yesterday in London on DUP support for the Conservatives, both sides are upbeat about negotiations so far.

Mrs Foster said the issues under discussion included the stability of the UK government, Brexit and the Northern Ireland economy.

The Conservatives are having to rely on the support of ten DUP MPs after they fell eight seats short of winning an overall majority in the UK General Election.

Former taoiseach Bertie Ahern has said he does not believe the Good Friday Agreement should be affected if a deal is reached between the DUP and the Tories.

Speaking on RTÉ's News at One, Mr Ahern said he felt it was unlikely any deal between the parties would change issues that have been carefully crafted over the last 20 years.

However, he said the only way to avoid objections and difficulties is to use the inter-governmental conference of the Good Friday Agreement.

Mr Ahern said the DUP is a very changed party to the one that had objected to the Good Friday Agreement.