Chairman of the Justice and Equality Committee Caoimhghín Ó Caoláin has written to Garda Commissioner Nóirín O’Sullivan, inviting her to attend the committee on Thursday.

It comes after Ms O'Sullivan said she will continue in her role as commissioner as she has "a journey of work to do".

She was responding to questions at a news conference where she announced radical reform of the Garda Traffic Corps following controversies over fixed charge notices and the exaggeration of garda breathalyser test figures.

Asked if she would stay on if the Dáil voted no confidence in her next week, Ms O'Sullivan said she had to make sure she saw out the commitment she made to ensure the foundations of a modern professional police service that delivers the cultural, structural and organisational reform necessary are put in place.

Asked if that meant she would stay on she said: "I am absolutely committed to making sure that we continue to deliver on the transformation and the change and the reform agenda that I committed to Government we would do."

Last week it emerged that more than 14,500 people who were prosecuted for road traffic offences are to have their convictions quashed as a result of the controversy over fixed charge notices and the exaggeration of garda breathalyser test figures.

It was revealed that from 2011 to 2016 the number of drink-driving tests gardaí claimed to have carried out was hugely exaggerated, by over 937,000.

The commissioner announced what she described as radical restructuring of roads policing as a part of a cultural reform to address issues around fixed charge penalty notices and roadside breath tests.

She said the restructuring was part of a cultural reform to address issues around fixed charge penalty notices and roadside breath tests.

She said Assistant Commissioner Michael Finn will be relieved of his other responsibilities to implement the changes. 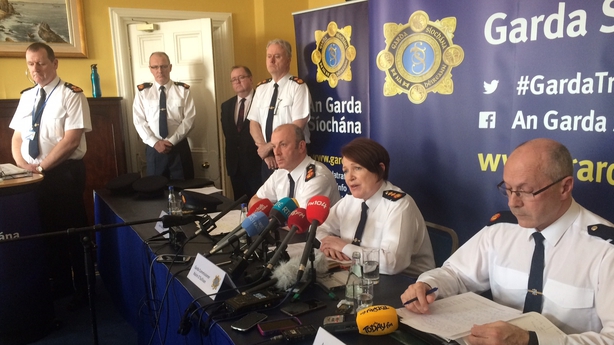 Speaking at Garda Headquarters in the Phoenix Park in Dublin she said the force has been taking corrective actions to ensure the problems in both areas do not occur again.

She said Assistant Commissioner Michael O'Sullivan has been appointed to establish the who, what and where of these issues and how they happened.

She said it will not just be a matter of dealing with gardaí on the ground but also looking at the roles of supervisors and managers in the problems.

She was joined at the press conference by Mr Finn and Deputy Commissioner John Twomey, who said he would give a detailed briefing on the timeline of how An Garda Síochána discovered and dealt with the issues.

He said in early 2016 a problem with the issuing of a fixed charge penalty notice was identified and this followed a change to procedures in December 2014.

He said in all cases offences had been committed but the problem was in the procedures in how the offence was dealt with as some officers continued to follow the old procedures.

There are more than 14,000 cases in which convictions will have to be set aside.

He said a dedicated helpline will be available from 3 April for anybody affected.

On the breath-test issue Mr Finn said he became aware two weeks ago of an issue with the roadside testing figures.

He took down the figures from the garda website and informed the Road Safety Authority.

'Appropriate action will be taken' if deliberate falsification found

Answering questions, Ms O'Sullivan said if a deliberate distortion of facts or falsification of figures was established then appropriate action will be taken.

But she added no such distortions or falsifications had yet been identified and An Garda Síochána will be investigating to get to the bottom of what happened.

She said it was a fact finding investigation "to establish what we're dealing with".

She said the force is working closely with the Central Statistics Office to ensure figures will be recorded correctly.

Mr Finn said systems need to be put in place so all agencies who rely on data from gardaí can depend on it.

Mr Twomey said An Garda Síochána had embarked on an unprecedented process of reform and during such a process wrongdoing would be uncovered.

Appearing on RTÉ's Six One News later, Ms O'Sullivan reiterated that she would not be standing aside.

She said she has a huge commitment to the reform programme she has been asked to undertake.

The commissioner said it is totally unacceptable that gardaí recorded almost one million roadside breath tests that never happened, and said it will not be tolerated.

She told RTÉ News the issue was first identified in June 2014 in the southern region and a national audit was started.

She said the scale of the problem was established on 10 March this year.

She acknowledged she was first aware of an issue with the tests in June 2014.

Garda Commissioner, Nóirín O’Sullivan has said that she was not aware of the exaggeration of garda breathalyser test figures until 2014 pic.twitter.com/B1wRXR9OHj

She said the results of an investigation into the issue by Assistant Commissioner Michael O'Sullivan will be known within three months.

Ms O'Sullivan said it was an oversight that the Policing Authority had not been informed of issues with wrongful convictions for road traffic offences.

She said that had been due to human error as some gardaí had wrongly issued summonses instead of fixed penalty notices, but there was also a system error as that should not have been possible.

Meeting between commissioner and minister 'constructive and useful'

Speaking in Tralee, he said a meeting between the commissioner and Ms Fitzgerald would allow the commissioner to outline all the facts available on what was a "very serious and important matter".

Ms Fitzgerald met Ms O'Sullivan for two hours this morning. A spokesperson for the minister described the meeting as constructive and useful.

Mr Kenny said the Government had made important changes to An Garda Síochána, including appointing Mary Ellen Ring to the Garda Síochána Ombudsman Commission, setting up the Garda Inspectorate and bringing in a "completely independent" Policing Authority.

But, he said, it would take some time for the authority to have a real impact on the culture and the perception of the force.

A Sinn Féin motion on calling on the Government to remove Commissioner O'Sullivan will be debated in two weeks' time.

Fianna Fáil yesterday said it could not express confidence in her at this time.