Arlene Foster has warned Sinn Féin it is "dangerous" to dictate to other parties who they should nominate for government positions.

Sinn Féin has publicly stated on several occasions that the party will not support the Democratic Unionist Party leader as first minister until her role in the Renewable Heat Incentive (RHI) scandal has been clarified by an inquiry.

However, Ms Foster revealed that the issue of her taking up the top post at Stormont has not been raised directly with her by Sinn Féin.

She added: "If we get into a situation where we are telling each other's parties who they should nominate for positions that becomes very dangerous, because we will obviously have an indication around Sinn Féin as to who they nominate."

Talks between political parties are ongoing in a bid to restore the powersharing government at Stormont.

Minister for Foreign Affairs Charlie Flanagan and UK Secretary of State James Brokenshire have also been meeting with parties in a bid to broker a deal.

Ms Foster described the dialogue between parties as being "in a very good nature".

She also said that the DUP has been in talks with Sinn Féin about legacy issues, which have become a major source of friction between the republican party and the DUP and UK Government.

Earlier Sinn Féin accused the British Government of "holding up" justice for families whose loved ones were killed during the Northern Ireland Troubles.

The party's Northern Ireland leader Michelle O'Neill said that funding for legacy inquests is a key issue for Sinn Fein as part of negotiations into the restoration of the powersharing executive.

Sinn Fein yesterday broke off its meeting with Mr Brokenshire, saying all he did was "waffle, waffle and more waffle".

Ms O'Neill claimed he had still not agreed to release funds for legacy inquests.

Following a meeting with Mr Flanagan shortly after he arrived at Stormont, Ms O'Neill said: "It is a time for strong political leadership and delivery.

"The British Government is holding up access to due process for families. They are key players in this. They need to step up to the plate."

Mr Brokenshire said there was a need for "intensification" of the talks as there is only a three-week window for appointments to be made to the Executive and the appointment of first and deputy first ministers and other ministers.

He said there had been helpful discussions with the parties and that he had discerned "real commitment from the parties to get back into government and an Executive and deliver for Northern Ireland".

Mr Flanagan joined Mr Brokenshire to meet with the parties and facilitate talks aimed at restoring the Stormont institutions. 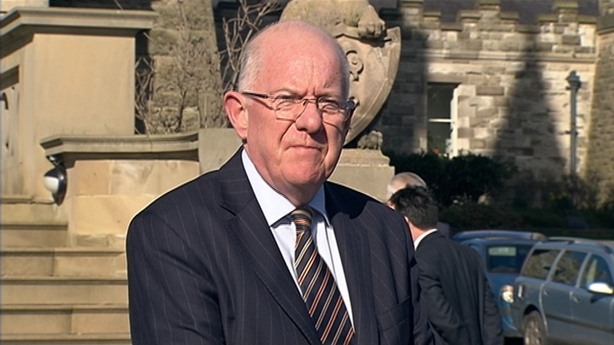 As he arrived at Stormont Castle, he said: "This is a very important opportunity to restore the power-sharing institutions in accordance with the Good Friday Agreement.

"We are operating under a very strict time-frame.

"I detect a willingness on the part of all the parties involved to sit down and engage constructively."

The recent election ended the unionist majority at Stormont with Sinn Féin now just one seat behind the DUP.

Sinn Féin and the DUP now have three weeks to reach a deal and if a government cannot be formed within that time then, under law, another election can be called.

If no power-sharing government is formed, power could return to the UK Parliament at Westminster for the first time in a decade.