Gardaí are appealing for witnesses following a fatal assault on a 40-year-old man at a truck stop in Fermoy in Co Cork last night.

The victim has been named as Ludovel Pasztor, a Slovakian national, who had lived in Fermoy for a number of years with his wife and two young daughters.

Two men have been arrested by gardaí investigating the incident.

A second man in his 30s was injured in the incident and was brought to Cork University Hospital, where his injuries are described as non-life-threatening.

The two men being held are both truck drivers, aged in their late 20s and early 40s, and were arrested at the scene.

They are being questioned at Fermoy and Mallow Garda Stations.

Forensic crime investigators are continuing their investigations at the crime scene at the rear of the Amber Oil filling station on the old Cork-Dublin road, which has been cordoned off.

Mr Pasztor's body has been removed from the scene and a post-mortem examination has taken place at Cork University Hospital. 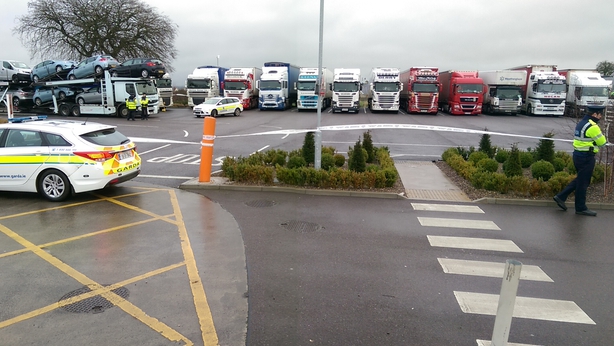 His body was discovered by a staff member at around 10.30pm last night.

Gardaí are investigating reports that an altercation broke out between the two drivers and the two other men which resulted in both of them being assaulted, one fatally with an iron bar.

It is believed Mr Pasztor had sustained head injuries.

CCTV footage is being examined as part of the garda investigation, and evidence has been removed from the scene for forensic laboratory examination.

The service station is a popular stop for long haul drivers and it was full last evening with up to 20 articulated trucks and lorries.

Drivers have given statements to gardaí and are waiting for the forensic examination to finish before they will be allowed to resume their journeys.

Gardaí appealed for witnesses, in particular anyone who was in the vicinity of Pyke Road/Dublin Road between 8.30pm and 10.30pm last night to contact Fermoy Garda Station on 025-82100, the Garda Confidential Line on 1800-666-111 or any garda station.