Greek soldiers have successfully defused a World War II bomb in Thessaloniki, the country's second largest city, after evacuating tens of thousands of people from the area.

"The operation is over, everything went well," regional security chief Apostolos Tzitzikostas said four hours after a demining team began its work.

The 1.5m-long bomb was initially thought to contain nearly 250kg of explosives, but on closer inspection was found to be a 170kg device.

Army chief of staff Nikos Phanios said the bomb's firing mechanism "was still in a very good shape, and this was what had us worried."

The device was American-made he said.

Some 70,000 people were targeted for evacuation within a 1.9km radius of the bomb site, affecting three working-class neighbourhoods west of the city-centre.

The start of the operation was slightly delayed as police removed a camera that had been placed above the crater by a Greek media outlet in breach of guidelines for covering the event.

The operation is unprecedented in Greece, "where a bomb of this size has never been found in an area this densely populated," Mr Tzitzikostas added.

But shopkeeper Stelios Orphanos said that people in the area could remain at home if they stayed indoors until the bomb had been defused.

Many chose to do so "because they are scared of thieves," he said.

Some of those evacuated complained. A woman in her 80s muttered as she was taken away: "There's no reason to be scared, if the bomb had to go off it would have done so already."

Most of the buses brought for evacuation remained empty however as many people left on their own.

Some 400 refugees in a nearby camp were also bussed to safer areas. 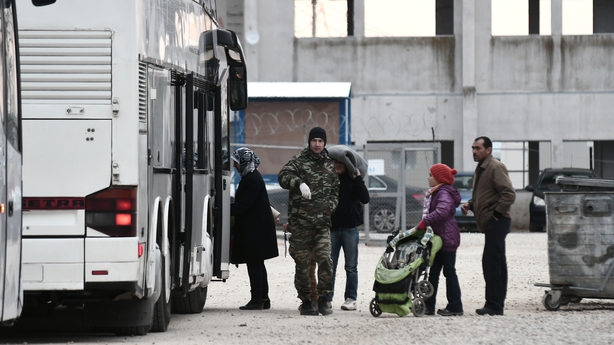 According to Greek media reports, the bomb was dropped by a British plane during air strikes on the city's nearby railway station and port in 1943.

The army however has not confirmed or denied the report.

Seven decades after the end of World War II, unexploded bombs from the conflict are still being found around the globe.

On 23 January dozens of people were evacuated after a bomb was found near a Hong Kong university, while three days before that Britain's navy disposed of a suspected wartime bomb found close to the parliament in London.

In the German city of Augsburg, 54,000 people had an unwelcome Christmas surprise on 25 December when they had to leave their homes while authorities dealt with a bomb dropped by Britain during the war.