Whale rescuers are cautiously optimistic that the current wave of mass beachings in New Zealand is over, after hundreds of the creatures died after being stranded ashore.

The crisis began early Friday when a pod of 416 whales were found stranded on the 26km Farewell Spit, with hundreds more following them over the weekend.

The shallow, sweeping spit is believed to interfere with the whales' navigation systems and is a regular scene of mass strandings.

As the latest low tide approached, around 300 pilot whales were heading out of Golden Bay in the northwest of the South Island and swimming towards the deep-water safety of Cook Strait.

"They're the exact words," he added, when asked if he was cautiously optimistic the crisis was over.

"We've pulled our boats out of the water." 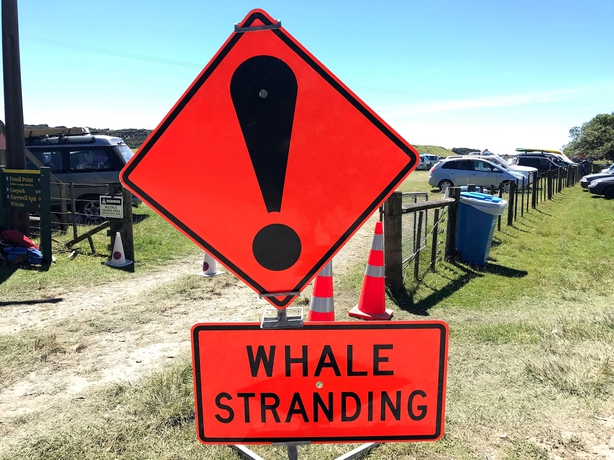 The news came as a relief for the hundreds of exhausted volunteers, who had spent three days comforting the stranded animals and keeping them cool while waiting to refloat them on the high tide.

Late yesterday afternoon, when rescuers believed the situation to be under control, about 240 whales moved around a small flotilla of boats and a human chain of rescuers standing in the water trying to herd them away.

They beached themselves about three kilometres from the Friday stranding.

By Sunday morning most had managed to refloat themselves and at high tide volunteer workers were able to get the remaining animals back into the water where boats were used to guide them towards the other survivors.

Many volunteers gathered on the shoreline broke down in tears on hearing the latest strandings appeared to be over.

Louisa Hawkes, from the environmental group Project Jonah which has been assisting with the rescue, told them it was only natural they would feel emotionally drained.

"The stranding might be winding down but the emotions are still quite close to the surface. There have been some really hard moments," she said. 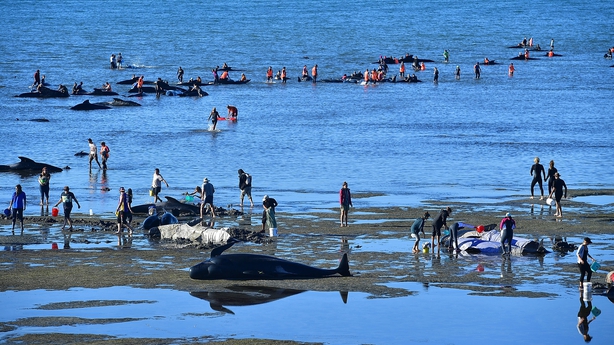 Mr Lamason estimated 666 whales beached themselves "but that will get the conspiracy theorists going", he added, referring to the figure which is the reputed Biblical reference to the devil.

There were references on social media in New Zealand suggesting the strandings and a 5.2-magnitude earthquake early today near Kaikoura, which was severely damaged by a 7.8 earthquake in November, may have been linked.

Similar questions were raised in 2011 when 107 pilot whales beached themselves on Stewart Island off the coast of the New Zealand mainland, just two days before 185 people were killed in the Christchurch earthquake.

However, scientists have dismissed this theory.

"There's no strong evidence that strandings are linked to earthquake events. For marine mammals these events are mostly inconsequential to them," Auckland University marine biologist Rochelle Constantine told the New Zealand Herald.

"I think these whales just make a mistake."