Minister for Jobs, Enterprise and Innovation Mary Mitchell O'Connor has said she is confident that new business could be brought to north Kildare, following a decision by HP Inc to close its business.

Almost 500 employees are likely to lose their jobs over the next 12 months.

Staff at the HP Inc print business manufacturing plant were informed of the decision at a meeting this morning.

HP Inc has blamed efficiencies and cost savings for the decision.

Ms Mitchell O'Connor said she has asked that all the supports of the State be made available to any workers affected by the decision and that attracting new investment was a priority.

The minister said that she spoke to the company last week but was told there would be no change to the decision to close the plant.

She said the Government and the IDA "did everything possible" to avoid this happening, with the IDA in "intensive daily engagement" with the company in a bid to persuade the company to keep the operation open. 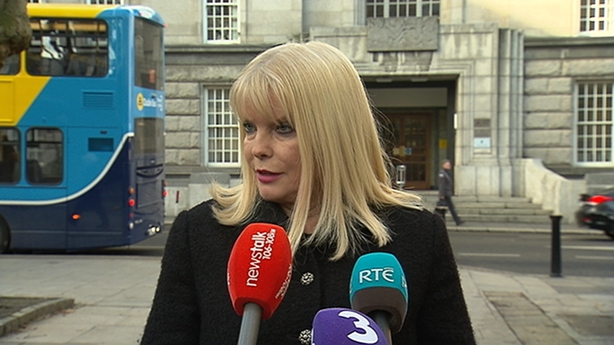 However, she said all would be done to support the workers.

The announcement was a "significant blow to the employees, their families and to the region", she said, but added that a plan is in place and said she is confident the IDA will be able to able to bring new business to the area.

Taoiseach Enda Kenny told the Dáil that the Department of Social Protection will engage with the employees to advise them of their benefits and rights.

The company said the decision to close is not a reflection on its employees in Ireland or the site's performance.

It says it is aware of the impact the decision will have on the employees and it is focusing its efforts on supporting them and identifying opportunities for them and providing a programme to help them prepare for the transition ahead.

Sales operations for its printing and personal systems business will remain in Ireland. 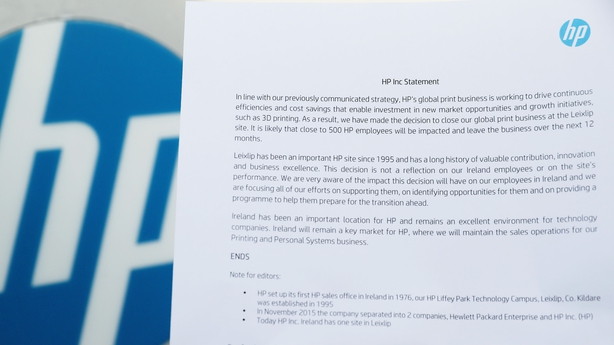 North Kildare Chamber chief executive Allan Shine said the announcement by HP Inc is not entirely surprising, but described the news as devastating for the families concerned.

Speaking on RTÉ's Six One, he said it is important that all relevant agencies group together to work and find viable alternatives for employees at the company.

He said he is confident the workers will find employment within the high-tech industry in Kildare.

AAA-PBP TD Ruth Coppinger said the job losses highlighted the massive reliance on US and foreign direct investment in Ireland and said it showed the complete lack of a native industrial policy.

Fianna Fáil's James Lawless said the Government had to do everything to offer support to the workers who were losing their jobs.

Sinn Féin TD Maurice Quinlivan expressed his support for the staff and said the job losses were "truly shocking".

Social Democrat TD for Kildare North Catherine Murphy earlier said it would be useful for the Department of Jobs to meet the four local TDs to see what can be done.

Speaking on RTÉ's Morning Ireland, she said HP Inc was an important company and a big employer in the area and it would be important to keep some form of manufacturing at the plant.

Ms Murphy said the factory drew its workforce from a large area and not just from north Kildare.

IDA CEO Martin Shanahan also said he is confident that new business can be brought to Leixlip.

Speaking on RTÉ's News at One, he said the site is an attractive one and the workforce is highly skilled, and he believes the site could be sold as a going concern.

Another option, he said, could be to have multiple tenants on the site.

He said: "As of today, we are in contact with companies whom we feel may be a fit for the site. There are multiple activities on the site at the moment, services and manufacturing. It could definitely be sold as a going concern."

Mr Shanahan said that every effort was made to try to secure the site but that the fortunes of the global print industry had declined.

As it Happened: Political reaction, updates

HP Inc site manager Maurice O'Connell said the decision to close the plant was not down to a lack of competitiveness.

He said the company wants to consolidate manufacturing to fewer sites in order to achieve operational and organisational efficiencies, and the Co Kildare plant is a small site within the company.

Mr O'Connell said there may be opportunities for some of the staff to be redeployed to other sites around the world.

He said the workers at Leixlip had made a great contribution to the company and some of their skills may be transferable to other HP Inc locations, but does not how many might be sought.

Asked what the reaction of employees had been to the news, Mr O'Connell said it was a sad and disappointing day for them.

He said many have had a long term relationship with HP, up to 22 years in some cases.

He said the company is really concerned about the impact the announcement will have on the staff, and they would be offered an enhanced redundancy package to ensure they are extremely well looked after, although he did not specify what terms would be.

US based Hewlett-Packard first opened a site in Ireland in 1995 and quickly grew to employ thousands of staff.

In 2015, the company globally split into two independent separate businesses, HP Inc and Hewlett-Packard Enterprise, so that both could compete more effectively in the changing technology market.

HP Inc continued with the traditional PC and printing business, while Hewlett-Packard Enterprise has focused on cloud computing hardware, software and services.

Since then the printing business of HP Inc has come under growing pressure from competitors and a changing market.

In October last year HP Inc announced that it would cut 3,000-4,000 jobs globally over the next three years.

Workers at Hewlett Packard Enterprise are not impacted by today's announcement at HP Inc.