Donald Trump took power as the 45th president of the United States today and pledged to end what he called an "American carnage" of rusted factories and crime in an inaugural address that was a populist and nationalist rallying cry.

As protests erupted elsewhere in Washington, Mr Trump said the American middle class has been devastated by the outsourcing of jobs abroad.

"From this moment on, it's going to be America first," the Republican told thousands of people gathered on the grounds of the National Mall as he delivered his inaugural address.

With Barack Obama and three other former presidents sitting nearby, Mr Trump accused previous US administrations of enriching Washington at the expense of struggling American families. 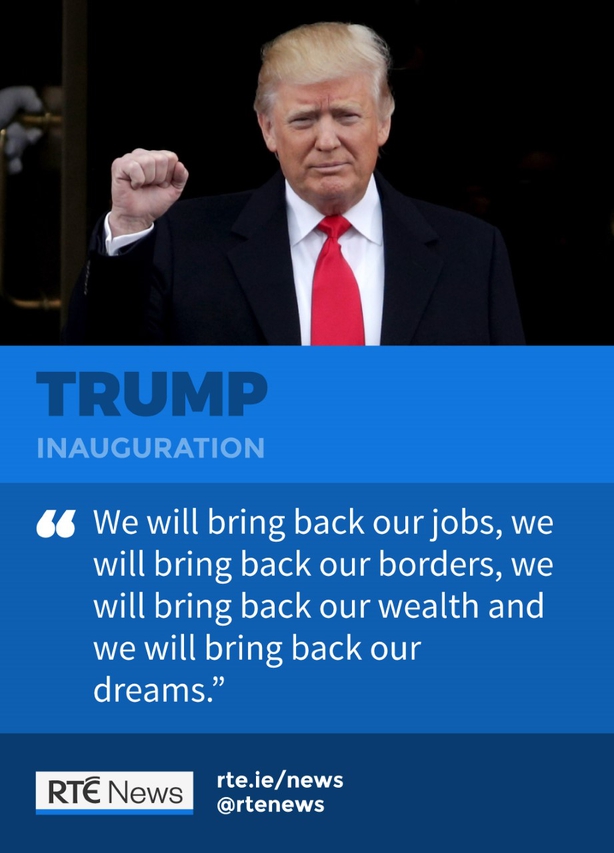 Underscoring the deep divisions in the country, protests against Mr Trump turned ugly in downtown Washington. Black-clad activists smashed shop windows, blocked traffic and fought with police in riot gear who responded with tear gas and stun grenades. Up to 90 people were reportedly arrested.

Aerial pictures of the crowds of Mr Trump's supporters on the Mall showed a much smaller turnout at midday today than that in comparable photos from Mr Obama's first inauguration in 2009. Estimates of today's crowd size were not immediately available from police.

The inaugural address was vintage Trump, with plenty of material gleaned from dozens of campaign rallies he staged last year on the road to victory on 8 November over Democrat Hillary Clinton, who attended the ceremony with her husband, former president Bill Clinton.

Mr Trump said the United States has enriched foreign industry at the expense of American companies, subsidised the armies of other countries while letting the US military become depleted, and spent trillions abroad while allowing US infrastructure to crumble.

"The wealth of our middle class has been ripped from their homes and then redistributed across the entire world," he said.

Mr Trump accused the Washington establishment of protecting itself but abandoning regular citizens who have suffered from poverty and crime.

"This American carnage stops right here and stops right now," he said. "Every decision on trade, on taxes, on immigration, on foreign affairs, will be made to benefit American workers and American families," he said.

Mr Trump, 70, takes over a country divided after a savage election campaign.

Donald J Trump has been sworn in as the 45th President of the United States of America pic.twitter.com/3hHVTaby0B

The dark vision of America he often paints is belied by statistics showing low levels of unemployment and crime nationally, although Mr Trump won many votes in parts of the country where manufacturing industry has been badly hit.

A wealthy New York businessman and former reality TV star who has never held public office, Mr Trump will set the country on a new, uncertain path at home and abroad.

In his speech, Mr Trump signalled the possibility of a more aggressive approach to so-called Islamic State militants.

"We will reinforce old alliances and form new ones, and unite the civilised world against radical Islamic terrorism, which we will eradicate completely from the face of the earth," he said. 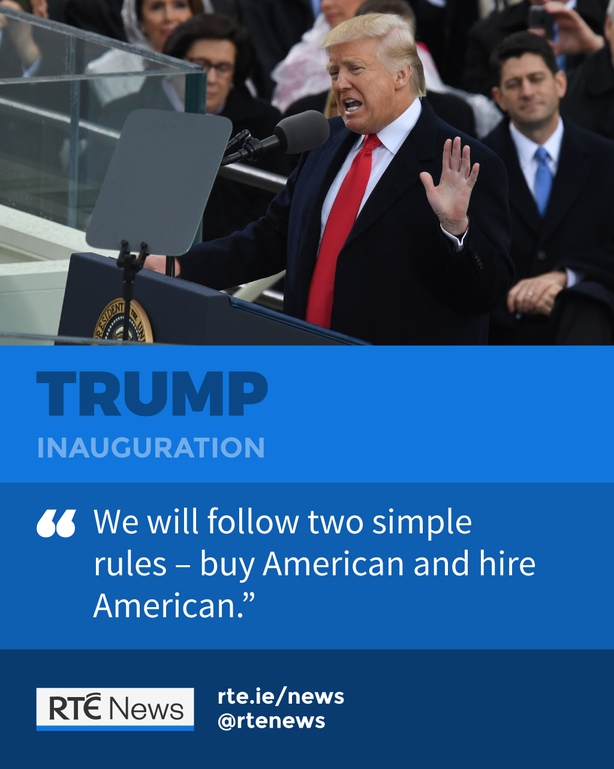 Mr Trump's election was greeted with concern by many countries around the world, in part because of the potential for an isolationist foreign policy.

In an interview after Mr Trump was sworn in, German Vice Chancellor Sigmar Gabriel said, "What we heard today were high nationalistic tones."

"I think we have to prepare for a rough ride," he told public broadcaster ZDF, adding Europe should stand together to defend its interests.

Mr Trump's ascension to the White House, while welcomed by Republicans tired of Mr Obama's eight years in office, raises a host of questions for the United States.

Mr Trump campaigned on a pledge to impose a 35% tariff on imports from US companies that went abroad.

More than 60 Democratic lawmakers stayed away from the proceedings to protest Mr Trump.

Many demonstrators are to participate in a 'Women's March on Washington' tomorrow. Protests are also planned in other cities in the United States and abroad.