Verdicts of unlawful killings have been returned at the inquests into the deaths of two men abducted, murdered and secretly buried by the IRA during the Troubles.

The bodies of Kevin McKee and Seamus Wright, two of the so-called "Disappeared", were recovered from a shallow grave on reclaimed bogland in Co Meath last year.

They both vanished in Belfast in October 1972 and were shot by the IRA on the suspicion they were working as British agents.

The bodies were discovered on a farm near Coghalstown after lying undisturbed for about 40 years in a shallow grave - one body on top of the other.

This morning the inquest into the death of Mr McKee heard the 17-year-old died from a gunshot wound to the head.

At today's inquest at the Coroner's Court in Dublin, State Pathologist Professor Marie Cassidy said that she examined the skeletal remains recovered from the site last year.

She said she established that the victim was a young male, aged 16 to 18, who had died from a gunshot wound to the head, and that he had been dead for about 40 years.

Geoff Knupfer, forensic scientist with the Independent Commission for the Location of Victims' Remains, told the court that the IRA had issued a statement in March 1999 in which it admitted involvement in the deaths of nine men, including Mr McKee and Mr Wright.

Information was later passed to the commission that indicated the two men had been buried in the Coghalstown area.

Mr Knupfer told the inquest that several unsuccessful searches of the area had been undertaken since 1999.

The remains of Mr McKee and Mr Wright were discovered in June 2015, during a search for another of the Disappeared, Joe Lynskey. 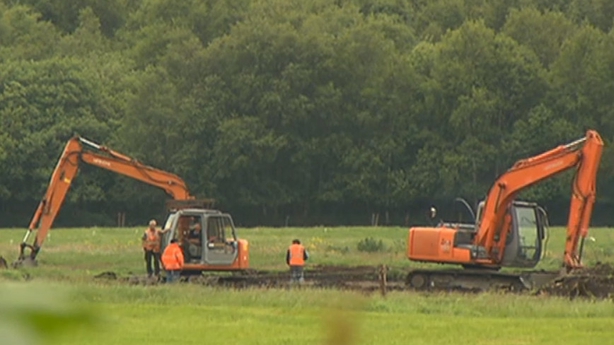 The inquest heard that DNA samples were later sent to a forensic laboratory in the UK, leading to the positive identification of Mr McKee.

Philomena McKee, a sister of the deceased, told the Coroner's Court that Mr McKee - the eldest of six children - was last seen by the family in October 1972.

She was 11 years old at the time of his disappearance.

She said that when the IRA took her brother, they had also taken her mother and that her family had been "mentally tortured".

Mr Knupfer told the inquest into Mr Wright's death that a bullet had been recovered from his remains during a post-mortem examination.

The inquest heard that DNA samples were later sent to a forensic laboratory in the UK, leading to the positive identification of Mr Wright.

A sister of the deceased, Breige Wright, told the Coroner's Court that Mr Wright, a 25-year-old asphalt labourer, was last seen by his family on 2 October 1972.

She said her father, mother, and Seamus's wife Kathleen had searched everywhere for him, contacted the British army and MPs, but had been unable to find him.

Breige was 15 years old at the time of her brother's disappearance. Her father died in 1991, and her mother in 2009. Seamus's widow later remarried.

State Pathologist Professor Marie Cassidy told the inquest that a post-mortem examination indicated that Mr Wright had died from a gunshot wound to the head, and had been dead for about 40 years.

The remains were found by the Independent Commission for the Location of Victims' Remains (ICLVR).

The commission, which was set up in the wake of the Good Friday Agreement, is tasked with investigating the cases of 17 people killed and secretly buried by republicans during the Troubles.

To date the remains of 12 people have been recovered.

Appeal for information over remaining Disappeared

After the verdicts were delivered, both families urged those with information about the whereabouts of the remaining Disappeared to give it to the cross-border body established to find them.

"We have come this far with information that has been given - so I would plead with anybody to come forward."

"We would appeal that all is done to allow the remaining four families to bury their loved ones."