The Director General of the European particle physics centre, CERN, has said Ireland could become an associate member of the organisation by around 2018.

Dr Fabiola Gianotti was speaking following a meeting in Dublin with the Minister for Jobs, Enterprise and Innovation around progressing options for Ireland's membership of the body.

Particle physicists and industry representatives have for some time lobbied the Government to join CERN.

The latest national science strategy, published a year ago, made a commitment to initiate negotiations with the organisation on membership options.

Discussions began in January around the possibility of Ireland becoming an associate member of the centre, which would cost the State a minimum of €1 million a year, with full membership rising to €10m per annum.

The head of CERN has said that Ireland could become an associate member of the organisation by around 2018 pic.twitter.com/Msew4ksobn

While there are a number of administrative and technical hurdles to be overcome before Ireland can join, it is understood that the main issue remains the cost of membership for the exchequer.

The Budget made no specific provision for CERN membership, and the department will have to secure Government and Oireachtas approval if it is to happen.

Speaking to RTÉ News, Dr Gianotti said she and the minister had had discussed the next steps of the process, currently at the point of developing the application and building the package that will form the basis of the agreement.

She said CERN would like Ireland to pay more than the minimum €1m, as the return to industry here would be proportional to the investment into the budget, and Ireland has very strong industry in many domains, from computing to silicon detectors.

Dr Gianotti said she is confident that Ireland will join the organisation, and is hopeful too, as CERN needs Ireland, she added.

In a statement, Minister Mitchell O'Connor said she had a comprehensive and detailed discussion on the benefits of CERN membership with the Director General.

These include the opportunity for Irish-based researchers to participate in CERN programmes, and the potential for companies here to compete for contracts to supply goods and services to the organisation.

She said they also discussed the opportunities for educational outreach around science, technology, engineering and maths.

The minister said before arriving at a decision on joining CERN, the Government must weigh up the benefits of membership against the costs, which are not insignificant.

This afternoon, Dr Gianotti visited St Luke's hospital in Dublin to see a new linear accelerator which is to be used in cancer treatment. 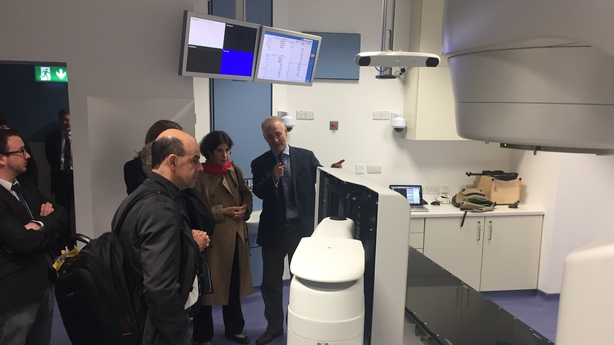 The technology used in the multi-million euro device is derived from the same technology developed for the Large Hadron Collider and other accelerators at CERN.