General Secretary of the Association of Secondary Teachers in Ireland Kieran Christie has said the union is a long way from agreeing a temporary suspension of its action.

Earlier, ASTI President Ed Byrne said that the union might agree to a suspension if members were offered improved terms on permanent contracts for more recently qualified teachers.

Speaking on RTÉ's Six One, Mr Christie said too much has been made of Mr Byrne's comments and that what the president was saying was that while there were serious negotiations that "were going places" and that "maybe interim measures could be looked at", he was saying no more than that.

With regard to any temporary suspension of industrial action, Mr Christie said: "We are a long way from that, unfortunately."

Almost 70% of second-level schools were closed today as members of the union were on strike in pursuit of equal pay for newly-qualified teachers, the first in a series of seven days of strike action on the issue.

Speaking at a picket outside a school earlier today, Mr Byrne had said a temporary suspension of industrial action was "a kite he was flying" and was not yet a formal offer to the Department of Education.

At present young teachers in other teacher unions are able to gain permanent contracts called contracts of indefinite duration after two years of full-time work. However, ASTI teachers need to wait four years.

Mr Byrne said that if ASTI teachers were offered the same terms as other teachers then the ASTI may be prepared to temporarily suspend its action, which threatens to close schools indefinitely from 7 November.

Earlier, the Minister for Education said he was very disappointed that the strike by members of ASTI had gone ahead today.

Richard Bruton said there was a substantial deal on offer to the ASTI on the issue of pay for more recently qualified teachers, which would see increases of up to 22% for many by January of 2018.

Mr Bruton said that the obligation to work extra hours agreed under the Croke Park deal applies across the public service, but in July, the ASTI decided unilaterally not to work these hours.

The Croke Park hours are an additional 33 hours that under the Lansdowne Road Agreement (which extended the Haddington Road Agreement until 2018) public sector workers have agreed to work.

Mr Bruton said that if the ASTI agreed to resume working these hours, then negotiations on other issues could resume.

The minister again declined to explicitly support the principal of equal pay for equal work. But he said everything the Government did was about equality.

Asked why some ASTI teachers would continue to be paid after 7 November and others would not he said the difference lay between a work-to-rule and a strike.

He said where schools managed to stay open ASTI teachers would be paid, but if they closed they would not. 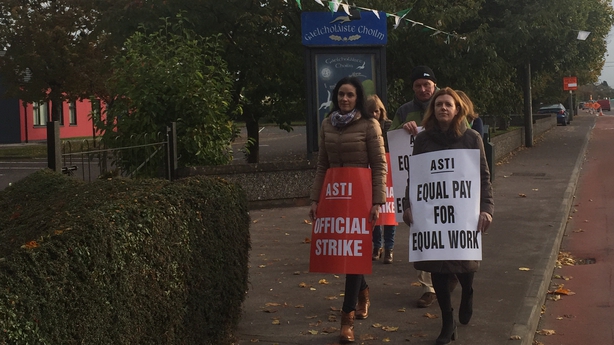 Speaking on RTÉ's Today with Keelin Shanley, Mr Bruton said: "We will be making contact again tomorrow and we hope that it will be possible to resume discussions.

"I think there is scope to resolve this and I am hoping there can be a resolution. I mean, if the ASTI agreed to work the 33 hours that everyone else works, then we would immediately pay the supervision and substitution money.

"Then we could sit down and discuss the roll out of advantages that we've negotiated for TUI and INTO, for ASTI members." 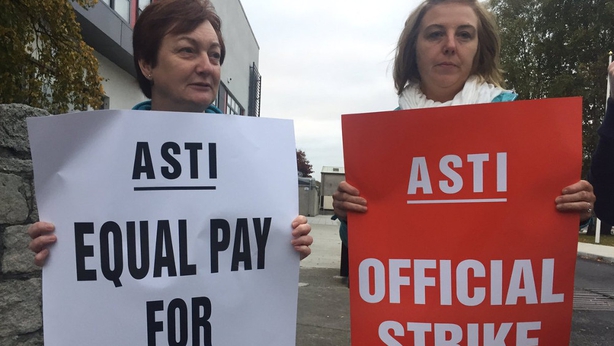 ASTI General Secretary Kieran Christie, however, has said that the gap between the union and the Department of Education remains "substantial".

Speaking on RTÉ's Morning Ireland, Mr Christie that the union worked hard at talks all week but the Government will have to make substantial changes to its position.

"Unfortunately we were unable to move to a point where we could avert today," he said.

"We will continue to work hard. Certainly the Government might be going into these talks hardliners but we are constructive, we are realistic people and we're going to work hard to bring resolution to these issues.

"But there are substantial issues between us, there is a substantial gap. The Department of Education and Skills will have to make some substantial changes to their position."

Meanwhile, the Taoiseach has said the closure of schools next month should not happen and he appealed to the ASTI executive to sit down with the department of Education.

Enda Kenny said pay restoration was a legitimate goal, but it had to be pursued with regard in the wider context of pay and conditions.

INTO teachers call for an end to pay inequality

Hundreds of Representatives from the Irish National Teachers Organisation and Teachers' Union of Ireland have held a rally outside the Dáil demanding an end to pay inequality. 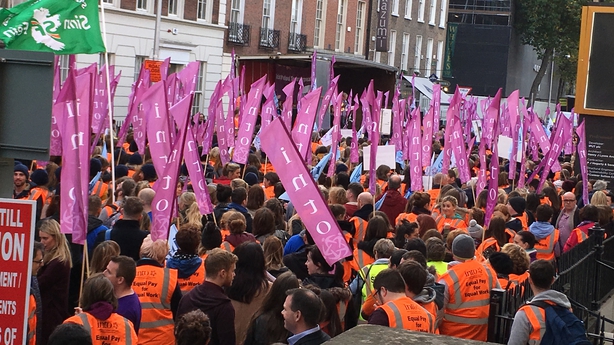 Organisers of the rally said while recent progress is very significant more needs to be done.

They said their campaign will continue until full pay parity has been achieved.

She said: "There must be faster pay restoration for public servants under the Lansdowne Road Agreement".

Ms Nunan said different unions have different approaches but they share the same objective for their members.