The Children's Court in Dublin has ruled that it is entitled to convict a 17-year-old boy of the false imprisonment of former tánaiste Joan Burton and her adviser Karen O'Connell at a protest in Jobstown in Tallaght two years ago.

Judge John King said the boy, who was 15 at the time, was present as Ms Burton and her adviser walked to St Thomas' Church from the local An Cosán centre in Jobstown until the slow march of the garda vehicle, in which she was a passenger, out of the area.

He said the boy had witnessed what was going on and instead of disassociating himself, he was an active participant.

Judge King said he could not give the boy an unconditional discharge.

But he imposed a conditional discharge, meaning he will not have a criminal record if he does not re-offend and is of good behaviour for nine months.

The judge said the personal liberty of Ms Burton and Ms O'Connell was restricted, without their consent.

He said the assembly of people was not peaceful and the behaviour of the protesters was contrary to public order and morality.

Accordingly, he said, the protest did not attract protection under the Constitution or the European Convention on Human Rights.

He said the State had a positive obligation to intervene for public safety, to prevent disorder and crime and to protect the rights of others, particularly, Ms Burton and Ms O'Connell.

He rejected the defence submission that the boy had no case to answer.

He said he was satisfied the State had proven its case beyond reasonable doubt and he was entitled to convict the boy.

Protesters had gathered outside the Children's Court in Smithfield this morning. 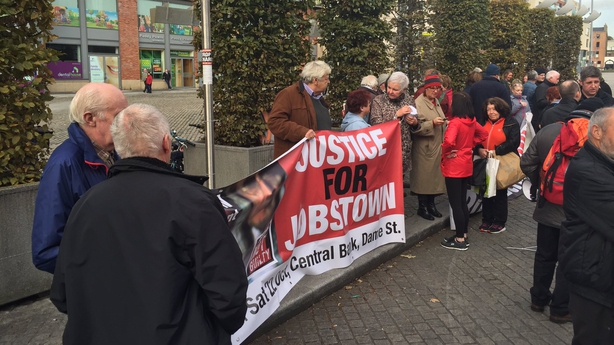 Under Section 98 of the Children's Act, there had been a number of options open to the judge.

He could impose a reprimand, he may have fined the boy and/or his parents, he could impose community service or a probation order.

Senior Counsel Giollaíosa Ó Lideadha said they would be asking the court to impose an order that would leave the boy without a criminal conviction.

Lawyers for the boy had asked the court to leave the boy without a criminal record.

Mr Ó Lideadha told Judge King that the boy had had serious medical problems in the last while, including anaemia, head and chest pains.

There was concern stress was a very big factor.

He said Ms Burton had said that she had no desire to see any young person jailed in relation to the charges before the court.

The court heard the boy had no previous convictions.

He was heavily involved in his community and testimonials were handed in outlining work with the homeless and the fact that he had an offer of a full-time job where his third-level education would be paid for.

Mr Ó Lideadha said it was never the boy's intention to cause any distress and he had apologised for the distress caused to the two women.

Judge King said this was an atrocious series of events and a terrible offence.

However, he said the boy did not act in isolation.

He said the boy was in the presence of many adults who should have known better and may have been influenced by them.

He had led a blameless life and had not come to any negative attention before the incident or since.

He said his community had benefitted from his participation in the community and he said he wanted to compliment him on the realisation of the necessity for social justice.

He said he could not give him an unconditional discharge.

But he imposed a conditional discharge, meaning he will not have a criminal record if he does not reoffend and is of good behaviour for nine months.

In a statement a short time ago, the 17-year-old's solicitor, Michael Finucane, said the young man had been placed at the centre of a very high profile and stressful case that went on for a number of days.

He said his client had asked him to say he was extremely relieved the proceedings had ended and the stress on him and his family had been lifted to some degree for the time being.

But Mr Finucane said the young man was disappointed by the outcome.

He said the legal team were considering options but he said an appeal of some sort will be taken in due course.