Minister for Transport Shane Ross has said he will not "ride in on a white horse in shining armour" with a chequebook to solve the industrial dispute at Dublin Bus.

He warned that he does not want to see management from Dublin Bus, Bus Éireann and Iarnród Éireann assuming the cheque book will open and disputes must be settled between the two parties involved.

Speaking at the Oireachtas Transport Committee this morning, Mr Ross said: "We are in the middle of a very sensitive time and it is not just Dublin Bus that is involved in an industrial dispute.

"Also this morning Bus Éireann is up in front of the WRC and that looks like it could be very difficult for both sides, for the Government and for everybody else."

Responding to questions from AAA/PBP TD Mick Barry, Mr Ross said: "You say that I should open the chequebook. That is something that I will not do and I say that for several reasons.

"I say it as much to the management as to the trade unions. Let me be clear here, I don't want to see the management of Dublin Bus, Bus Éireann or Iarnród Éireann coming to me or assuming for one moment that the chequebook is going to open.

"The Government position is quite clear this has got to be settled between the two parties involved in every case.

"Whereas you talk about the subvention being slashed. You are right but I would regard that as a completely different issue."

"The subvention is going to increase next year but it will be used to improve services as much as possible. I am looking for a very healthy increase in the subvention but that is a separate issue."

Shane Ross not going to 'ride in on a white horse in shining armour' with a cheque to solve Dublin Bus dispute https://t.co/AyzSIrFcvL pic.twitter.com/1r8ngJYQPk

"I am not going to ride in on a white horse in shining armour and have a chequebook and say that is not going to solve the problem. That would be exactly the wrong thing to do."

"This dispute, as everybody knows, will be resolved. But it is not going to be resolved if I participate."

Mr Troy spoke about the precarious financial position at Dublin Bus and the strikes that have led to "widespread disruption to workers, to students and to people who travel in Dublin.

"What I would have hoped and expected off you today would be a commitment on how you are going to fund these bodies by way of subvention on the way to the future," said Mr Troy.

Mr Barry said: "The feeling out there on the ground is that you are going to have to get off the fence and give the green light for "real talks" with the Dublin Bus workers and their unions."

He said it was an "incredible level of cutback" that has meant high fares for the people of the city who use the bus service and low pay for the workforce.

He claimed that low pay is subsidising the company, where people have not had a pay increase in eight years.

"You do need to open your chequebook and if necessary have a fight at Cabinet level with [Minister for Public Expenditure and Reform] Paschal Donohoe and [Minister for Finance] Michael Noonan."

Mr Troy cautioned the minister: "You are no longer a columnist with the Sunday Independent. You are the Minister for Transport and you have responsibility for Dublin Bus and you can instruct Dublin Bus to enter negotiations again without setting down any preconditions.

"We have heard from the unions that they are willing to re-enter negotiations and you have a responsibility to the 400,000 people who rely on Dubin Bus on a daily basis, to the drivers and the people who are affected."

Ms Munster said the only people who have not benefited from the upturn at Dublin Bus are the workers.

She said there is a responsibility of the minister to instruct management at the company, who are playing hardball.

She said there is an onus on Mr Ross to put pressure on Dublin Bus management to return to the negotiating table.

Mr Ross replied: "I am not going to produce a chequebook. Both sides are going to have to believe that. For me to comment on some of the things you have said will be interpreted as being involved one way or another."

He encouraged both sides to get together, but said "they cannot expect me, in a public or private forum, to be some sort of sugar daddy who is going to rescue them out of a difficult situation".

He said: "The State is not going to burden the taxpayer with an industrial dispute". 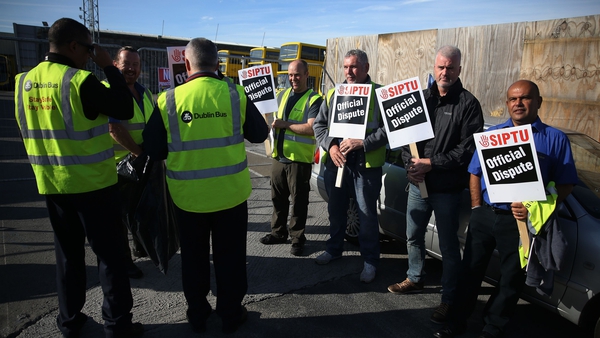